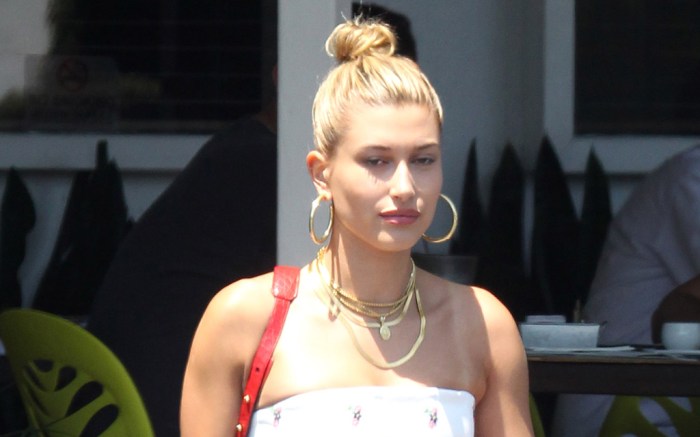 For Hailey Baldwin, 2017 has been a breakout year. The Footwear News cover girl and FN Style Influencer of the Year appeared on a slew of top runways — she walked in spring ’18 shows for Dolce & Gabbana, Moschino and Off-White, among others — and has become a recognizable face through numerous ad campaigns.

But Baldwin has earned just as much recognition for her personal style. The 21-year-old — who works with stylist Maeve Reilly — puts together pieces in bold ways. And she doesn’t follow a playbook when it comes to fashion: “I don’t think I have one signature look. I like boys’ clothes, and I like incorporating that. There’s something super-cool about a pretty girl who can put on a baggy pair of jeans and heels and have this sexy tomboy vibe.”

Baldwin may not have one set style, but there are themes that frequently emerge in her outfits. She often opts for leggy looks, wearing oversized sweatshirts or jackets with barely-there shorts.

The model’s favorite shoes are a pair of white Dr. Marten Coralia boots — the style features Velcro straps — which she wears with a wide variety of pieces for a casual, edgy look. She also loves sneakers, and she often throws on a pair of classic Adidas Stan Smith sneakers for a casual vibe.

And while Baldwin likes to wear casual shoes, she sometimes goes for what she calls a “’90s long-leg vibe,” sporting minidresses with high heels.

Hoodies are one of Baldwin’s go-to looks — and the star knows how to elevate them to another level. She frequently pairs her hoodies with heels for an unexpected twist. She isn’t afraid to go for completely casual looks, sporting sneakers with sweatpants or baggy jeans.

The supermodel often opts for bold colors, sporting neon green, cherry red or canary yellow, but she knows how to pull off bold colors by incorporating dark accessories, such as her beloved Docs or black booties. As a native New Yorker, Baldwin doesn’t shy away from wearing head-to-toe black, either.

Watch Baldwin discuss some of her bold street style looks below.

Click through the gallery to see more of Hailey Baldwin’s best street style looks of the year.