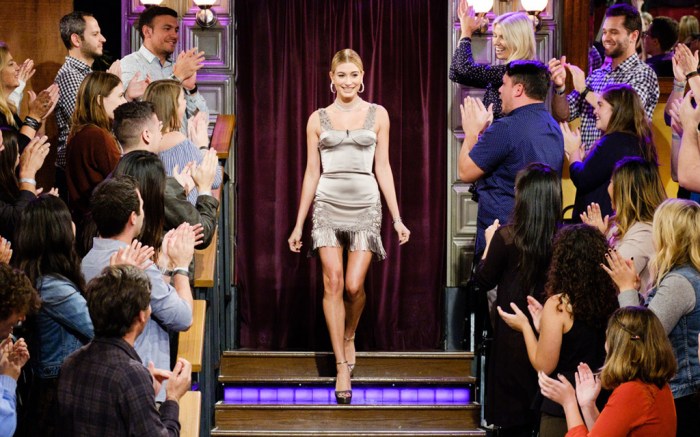 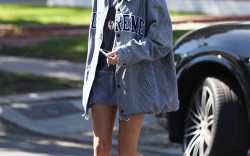 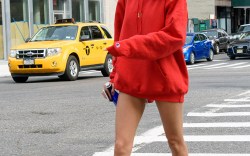 Hailey Baldwin brought her A-game to “The Late Late Show With James Corden,” on Monday. The model made her first late-night show appearance and she switched up her normal street style wear for the special occasion.

Usually sporting large leather jackets and sweatpants, Baldwin decided to step out in Jimmy Choo platform shoes paired with a matching Jonathan Simkhai minidress. Even Corden made note of her outfit change after he asked if wearing oversized garments was a thing. Baldwin didn’t hesitate to say, “Always. Always.”

And during her late-night show debut, Baldwin didn’t disappoint – Corden is her boss, after all. (She currently co-hosts “Drop the Mic,” a new program on TBS, which is executive-produced by Corden.)

In a segment called “Nuzzle Whaaa,” Baldwin beat fellow guests Matt LeBlanc and William H. Macy in a game that consisted of putting on blindfolds and identifying whatever is in front of them by nuzzling the object. Luckily for Baldwin, her guessing game was on-point. She easily identified a miniature horse that took the stage.

Baldwin’s unique style has made her a standout star, and she has recently been selected as the Footwear News 2017 Style Influencer of the Year. The much-anticipated FN Achievement Awards will be held on Nov. 28 at the IAC Building in New York and will honor the brightest stars of the business, including Baldwin.

To see Baldwin’s bold street style, check out the gallery.