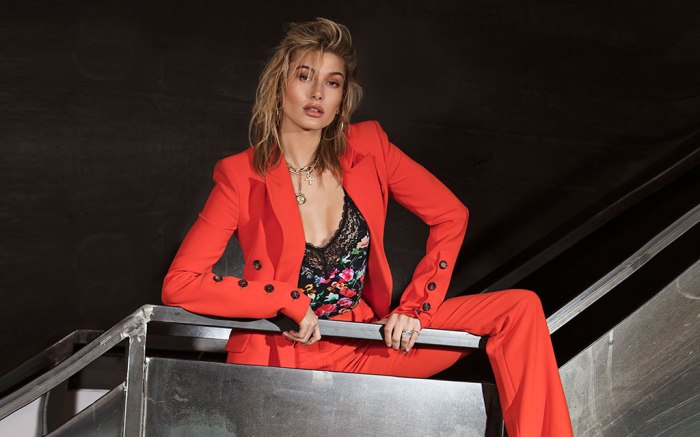 “Isn’t this everything?” Hailey Baldwin said while parading in an Altuzarra bright orange pantsuit and Adidas kicks on-set with FN this month at Brooklyn’s Industria studios. While SZA’s and Travis Scott’s albums set the ambiance for the day, it was Baldwin’s soft yet powerful presence that charged the room. And that same charisma infuses her bold street-style aesthetic.

Often spotted in unassuming ensembles, Baldwin finds a way to elevate each look with confidence and comfort, often by combining unexpected pieces.

And with nearly 11 million followers on Instagram alone, the 21-year-old knows how to get noticed.

“It’s about not being afraid to mix things together,” she explained to FN. “Being comfortable is really important. Even if I’m in heels, I make sure I’m in sweats or not something that’s super-tight from top to bottom. I also like doing something really simple, such as wearing a minidress with thigh-high heels because I like that ’90s long-leg vibe.”

In particular, Baldwin has found a sweet spot with the “tomboy chic” look. “I like boys’ clothes,” she said. “There’s something super- cool about a pretty girl who can put on a baggy pair of jeans and heels, and have this sexy tomboy vibe.”

Stylist and shoe designer Tabitha Simmons, who recently worked with Baldwin during Dolce & Gabbana’s spring ’18 catwalk show, credits the young model for finding her own lane in fashion.

“She is definitely ahead of her time. She has her own style. She doesn’t jump on trends, and because of that, girls look to emulate her,” Simmons said. “Hailey has grown into herself and has become more confident. She has a great spirit about her and is so positive. She’s also a chameleon. One minute she can wear something sexy and then the next just look really cool.”

Footwear designer Alexandre Birman commented, “Hailey knows how to translate contemporary fashion into her own style vocabulary, which is why I believe she is so influential. Because at the end of the day, it is real.”

Baldwin’s authenticity is elevated with a sense of effortlessness. “Her style is relatable. She’s a risk-taker, but she’s always comfortable with who she is,” said her personal stylist, Maeve Reilly, who also counts Halsey and La La Anthony as clients.

“If you can get something that looks right and you didn’t pay a lot for it — who’s not trying to do that?” she said. “I love fashion. I definitely pay attention to the runway collections. And I’m very aware of what people my age and younger think is cool.”

Baldwin has made an impression by wearing closet staples such as oversize hoodies and denim jackets, paired with combat boots, or her recent obsession with YSL’s slouch boots — and without a doubt, sneakers.

“Hailey will wear a sneaker to a Tom Ford after-party during Fashion Week and not care,” added Reilly. “I have to say, if she did one thing different than the rest, it’s that’s she’s always down to wear sneakers day or night.”

This fearless approach to fashion has not only put her on top of best-dressed lists, but it has proved her marketability for brands.

In August, Baldwin starred in the Adidas and JD Sports fall ’17 EQT campaign, and one month later, she was tapped to curate a runway show dubbed “Streets of EQT” during London Fashion Week to celebrate the partnership. She has also fronted campaigns for Topshop, H&M, Guess and L’Oréal Professionnel.

The young model, who also happens to come from a famous family — dad is actor Stephen Baldwin, uncle is Alec Baldwin — continues to pave her own way in show business, and it’s all at her own pace.

“Every year, I feel like there’s something new in terms of a breakthrough. There are certain covers I’ve done that have [allowed me to be] seen in a different editorial light, and then walking in certain shows,” she said. “Every year, that barrier is broken a little more.”