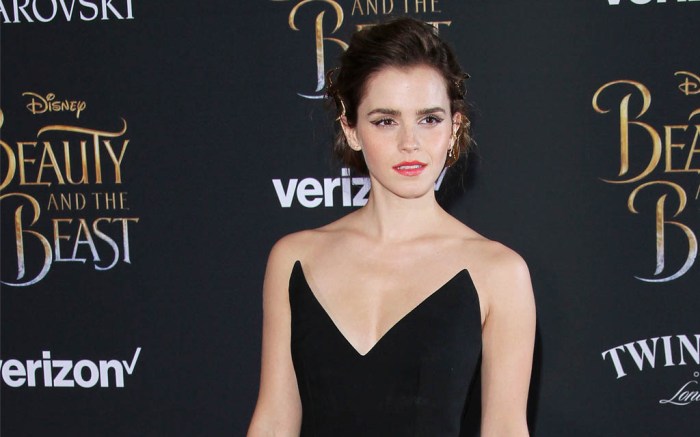 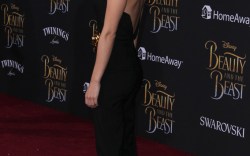 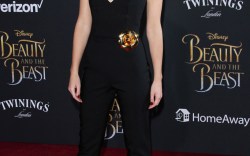 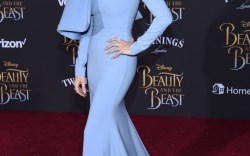 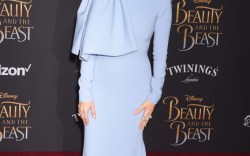 Emma Watson’s parade of Burberry pumps continues as she promotes her new “Beauty and the Beast” movie.

And today, the 26-year-old hit the red carpet in the slick black heels when she arrived for the Disney film’s premiere in Los Angeles. She teamed the shoes with an Oscar de la Renta strapless black jumpsuit that was adorned with a gold rose embellishment on the waist. The gold floral details continued around her short hair, which was tied back into an elegant twist and featured similar accessories.

Watson recently launched an Instagram account to track some of the eco-friendly fashion labels she has donned during the musical’s publicity blitz, which has so far taken her to Paris, Shanghai and London, among other places.

In the live-action adaptation of Disney’s 1991 animated feature, Watson brings to life Belle. Joining her in Hollywood for the star-studded affair were co-stars and celebrity fans of the film.

Dan Stevens, who portrays her captor-turned-lover Beast, looked dapper in a teal suit with matching shoes by Christian Louboutin. The lace-up “Cousin Greg” footwear retails for $1,150.

Luke Evans, who portrays antagonist Gaston, was sharp in a gray suit and dark dress shoes. Meanwhile, Celine Dion, who made the title song a hit nearly 25 years ago, was elegant in a blue floor-length gown.

Chrissy Teigen teamed black sandals with a chic red fringe dress alongside her husband, John Legend, who covered the film’s song in a duet with Ariana Grande.