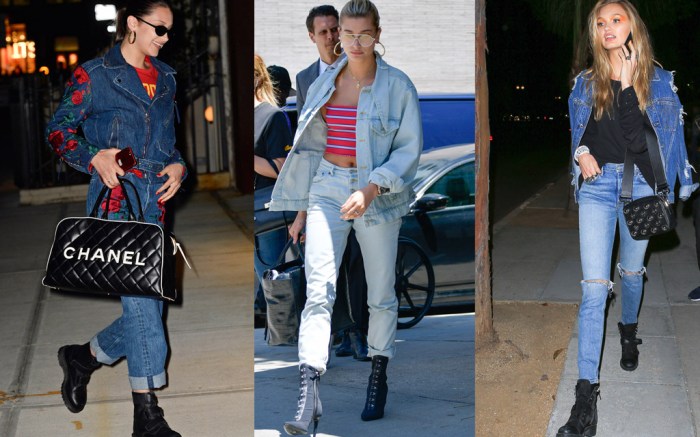 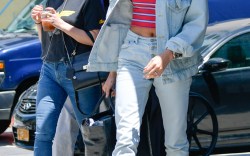 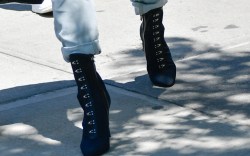 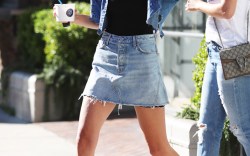 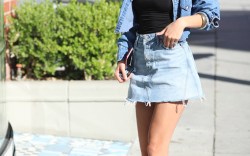 Jeans may never go out of style, but denim-on-denim has a reputation of being one of the trickiest looks to pull off.

From Britney Spears and Justin Timberlake’s iconic matching denim outfits at the 2001 Video Music Awards to Rihanna’s Rihanna x Manolo Blahnik denim chap boots, time and time again, evidence has shown that denim is a mixed bag, even if you’re one of the world’s most stylish stars.

But with the current popularity of jean jackets, doubling down on the material is a must-try for summer. While still difficult to perfect, jean-on-jean works great for casual outings — and celebrities are pulling it off with simple black boots that allow the denim to shine.

Supermodel Bella Hadid, a known fashion rule-breaker who recently tested denim sandals with a pair of jeans, has stepped out in denim-on-denim on a number of occasions. One of the 20-year-old’s most notable looks came on sister Gigi’s 22nd birthday, when she sported Adam Selman’s rose-embroidered  jacket and pants, finishing her look with a pair of chunky black workboots.

Miley Cyrus has been another big fan of the denim-on-denim look. While the 24-year-old has donned head-to-toe white for most of her recent performances, the singer — who sang a song called “Old Blue Jeans” in the “Hannah Montana” days — also loves the all-blue denim look.

Cyrus has been spotted in denim-on-denim, the perfect complement to her revamped, countrified image, on multiple date nights with fiancé Liam Hemsworth. She’s paired the look with multiple pairs of black boots, from thigh-high shiny black boots to worn-out workboots.

Of course, the right pair of shoes can glam up a casual denim look, as Hailey Baldwin proved on a recent outing. The 20-year-old model wore an oversized light-wash jean jacket with a matching pair of pants and a red, white and blue striped crop top. She finished off her look with statement gold jewelry and a pair of dark velvet booties, proving that a baggy denim outfit can be made extra special with the right shoes.

Celeb Trend of the Summer: Suits With White Sneakers