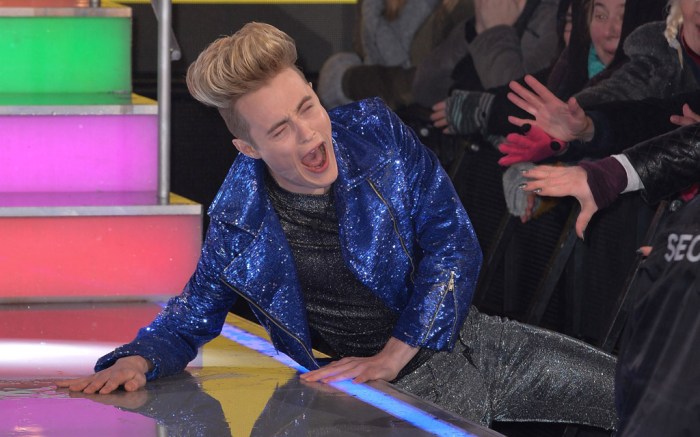 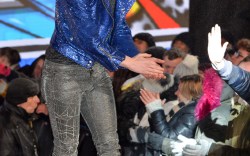 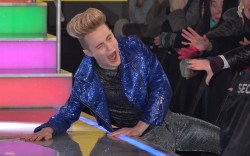 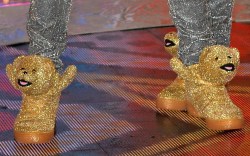 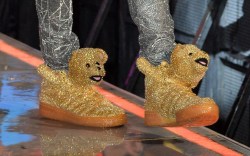 Pop duo Jedward made a loud entrance from head to toe when they arrived Friday for their second stint on “Celebrity Big Brother,” but fans of the reality series reacted much louder — with boos roaring from spectators along the outside stage.

Never a pair that blends in with the crowd, identical twins Edward and John Grimes stuck to their usual flamboyant style when they hit the catwalk while making their way for a live interview in Hertfordshire, U.K., ahead of entering the Big Brother house for its “All-Stars and New Stars” edition.

The sneakerhead brothers sparkled in Jeremy Scott x Adidas’ gold sneakers covered in glitter, featuring a head of the stuffed animal at the shoe’s tongue and an arm sticking out on each side panel. The sparkling treatment continued on their trousers, T-shirt and jacket.

If all eyes weren’t on them already, there’s no doubt John’s rough tumble off the runway and onto the floor got some attention. Not to be outdone, Edward fell on his back when he attempted a backflip during a performance.

The saying “when it rains, it pours is quite” apt — as the foul weather left some parts of the stage wet.

It was a tough crowd to please, but things went much better for the Irish brothers in 2011 when they entertained President Barack Obama and first lady Michelle during their visit to Dublin, Ireland. In fact, their style got approval from the commander in chief, who complimented them on their voluminous hair, they recalled.

The gig arrived after they wrapped their debut on “Celebrity Big Brother” that same year alongside Tara Reid, among other celebrities, on the British reality show.