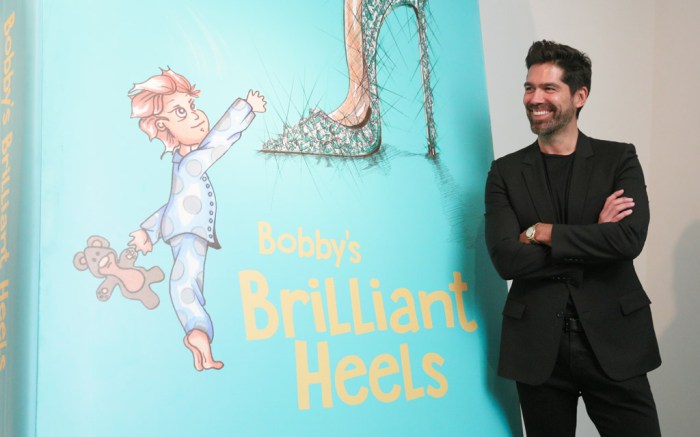 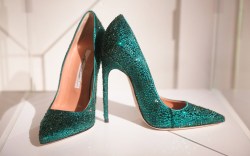 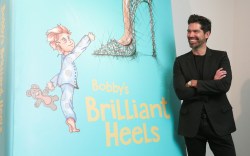 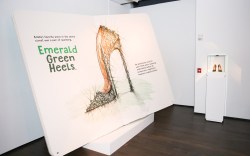 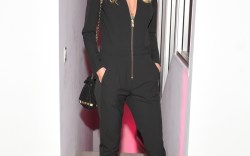 Brian Atwood has turned a story of rejection into sparkling triumph.

The designer presented a pair of emerald green heels and an illustrated children’s book that were inspired by a rejection letter Andy Warhol received from the Museum of Modern Art (MoMA) on his “Shoe” artwork.

Atwood collaborated with JJ Martin on the larger-than-life tribute book, “Bobby’s Brilliant Heels,” which was displayed with a pair of companion pumps at the opening of the “Letters to Andy Warhol” exhibition on Friday at 101/Exhibit in West Hollywood, Calif., presented by Cadillac and The Andy Warhol Museum.

Loosely based on his own childhood and experiences, the book explores themes of rejection and redemption.

“The possibility of creating a children’s book was unlike anything I have previously done,” Atwood shared in a statement. “And, of course, the request to create an over-the-top shoe certainly piqued my interest.”

Atwood added that he hopes the book fosters acceptance.

“The key message we hoped to illustrate is that what we are unfamiliar with is what often makes us uncomfortable and, therefore, unaccepting,” he said. “As the saying goes, art often imitates life, so I hope this story helps remind us all how it may take a while for the eye to adjust to something new — whether it’s a style of dress, an abstract painting, a new shoe shape or even a style of writing poetry. In a similar vein, this very project challenged my own comfort zone by forcing me to use my skills to sketch and having to adapt them to create illustrations.”

Part of a storyline in the book was sourced from a real-life moment in his past.

“There are references to how, as a kid, I organized fashion shows in my living room with all my brothers and sisters. Luckily, they humored me and supported my creativity, which empowered my development as a designer,” Atwood explained. “I hope that everyone loves Bobby and his story as much as I do and that everyone spreads the message that an uninhibited imagination and originality must be celebrated.”

The exhibition is free and open to the public, and includes projects from other Warhol fans such as Sean Lennon’s “Love and Warhol” song inspired by Mick Jagger’s letter to Warhol asking him to design artwork for The Rolling Stones’ “Sticky Fingers” album from 1971. Lennon’s music accompanies a virtual reality experience that features a virtual reality experience. Scribe Derek Blasberg provided a portraiture series that explores designer Yves Saint Laurent’s letter to Warhol expressing gratitude for his friendship; Sienna Miller, Zac Posen and David LaChapelle are featured in a short film that nods Warhol’s fan letters to Truman Capote discussing fame, determination and ambition.

The Warhol presentation runs through Jan. 22.

For more photos of the “Letters to Andy Warhol” exhibit launch, click through the gallery.