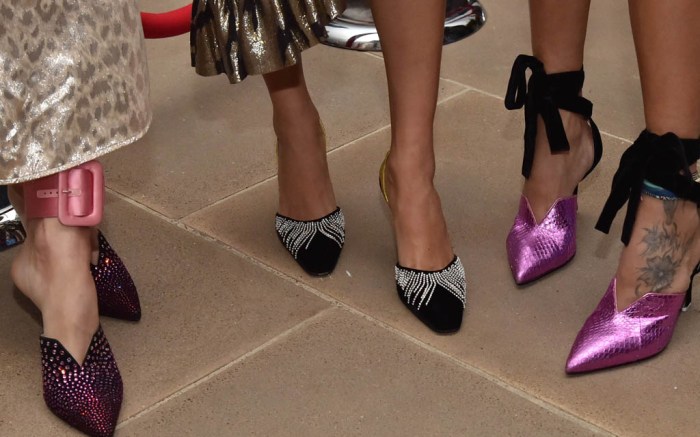 There were plenty of great shoes at last night’s 2017 Footwear News Achievement Awards (would one expect any less?), but the evening’s best looks were more about classic evening-appropriate sneakers and sleek, sophisticated boots and pumps than anything too outrageous and wacky — there were no towering ultra-platforms, feathers or vinyl to be found.

Here, the 10 best shoes from the FNAAs:

The singer and actress — fresh off a Bahamas vacation with supermodel friends Bella Hadid, Kendall Jenner and Hailey Baldwin — arrived in a pair of Fenty x Puma knit over-the-knee sock-boots that seemed all at once evening appropriate, sexy-sporty and cozy enough for the cold weather.

The model (who also just returned from the Bahamas getaway), arrived on the red carpet in a full look from Fendi that included a pair of nude sock-boots with a stiletto heel. The pale blue boxy shirtdress was a departure from Baldwin’s usual penchant for ultrashort body-hugging numbers, and it was a more grown-up look that reflected her Style Influencer award, which she accepted later in the evening.

Attico’s co-designers nabbed the Launch of the Year award and had, hands-down, one of the evening’s best looks overall, coordinating metallic and brightly colored silk dresses that paired perfectly with their rhinestone-embellished slingbacks and metallic pink ankle-wrap pumps (all their own designs, of course).

The WNBA star presented Puma with the Marketer of the Year award, and she remained on-brand in a Fenty x Puma look (from Rihanna’s naughty-schoolgirl fall collection) that included a ribbed crop top and pointy-toed lace-up booties.

The model presented Steve Madden with the Company of the Year award and sported a pair of black ankle boots embroidered with dragons on the side (by Madden, natch).

The model stepped on the red carpet with Malone Souliers’ Roy Luwolt in a bright pink sheath dress and a pair of elegant open-heeled pumps by the brand.

The menswear designer presented Virgil Abloh with the Shoe of the Year award for his Air Jordan 1 with Nike, so naturally, Preston sported a pair from Abloh’s collaboration with the sneaker brand.

The Saks Fifth Avenue fashion director wore a color-blocked silk dress by Attico to present the brand with its Launch of the Year award. She rocked a pair of glittery Gucci sneakers that made for one of the coolest and most colorful looks of the night.

The former NBA player certainly won for craziest outfit of the night, with a plush suit and wacky tie. But his velvet Pumas were an elegant accent and an evening footwear option that other men will hopefully try on the red carpet.

It would be a shame to not include one of the evening’s biggest stars, Stan Smith, who received the Lifetime Achievement Award. Of course, Smith showed up in a fresh-out-of-the-box pair of his legendary kicks and was showered with adoration the entire night (especially from Baldwin, a big fan of the sneakers, who had a fan girl moment with Smith early on in the night. It wasn’t the first time — and it certainly will not be the last — that the ubiquitous footwear will make a red carpet appearance.

See more guests on the red carpet at the 2017 FNAAs.