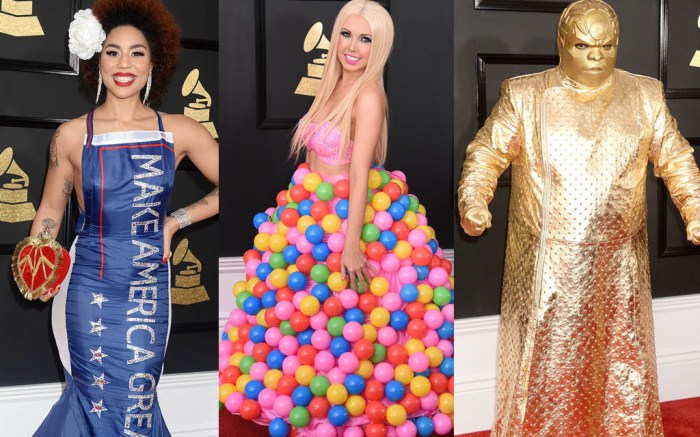 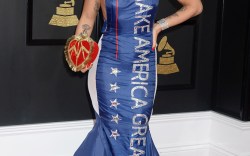 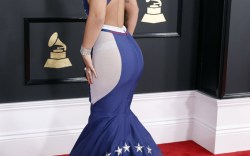 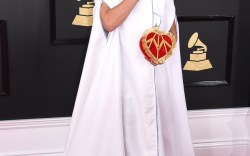 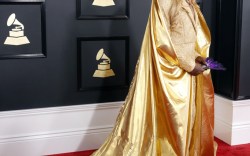 The Grammy Awards bring out some daring looks. And today, the red carpet style parade at the 59th annual ceremony in Los Angeles was no exception.

Singer Joy Villa made one of the most dramatic arrivals of the night. Wrapped in a white cape, the entertainer removed the piece and revealed a patriotic ensemble designed by Andre Soriano that celebrated President Donald Trump’s slogan: “Make America Great Again.”

The figure-hugging number was emblazoned with “Trump” in silver bead detail along the flared skirt. Though her heels were mostly covered, the musician completed the look with glittery platform sandals.

Speaking to Footwear News, Soriano described himself as a supporter of President Trump and said the dress sends a message of unity.

“We love America and what it stands for — and we went for the kill,” Soriano shared in an interview. He added that the idea came to him after the anti-Trump women’s solidarity protests in January. “During the march someone said they wanted to bomb the White House,” he explained.  “We want to put the country together. It’s about the whole world. We cannot endorse hatred — we endorse love, period. Let’s support our president — he’s bringing jobs in America.”

“Having a Blast at the#grammys2017 wearing my inspirations!” singer Jacqueline Van Bierk captioned an Instagram photo of the look.

Though the night was in honor of the Grammy, it looked like Cee Lo Green had the Oscar statue on his mind. The crooner teamed a pair of black shoes with a gold outfit — and a mask to match.

Meanwhile, blonde entertainer Girl Crush marched out like a candy-coated explosion. The musician had on a pink bralette teamed with a voluminous skirt, which was adorned with multicolored balls.

Click through the gallery to see more eye-catching style statements from the 2017 Grammy Awards red carpet.