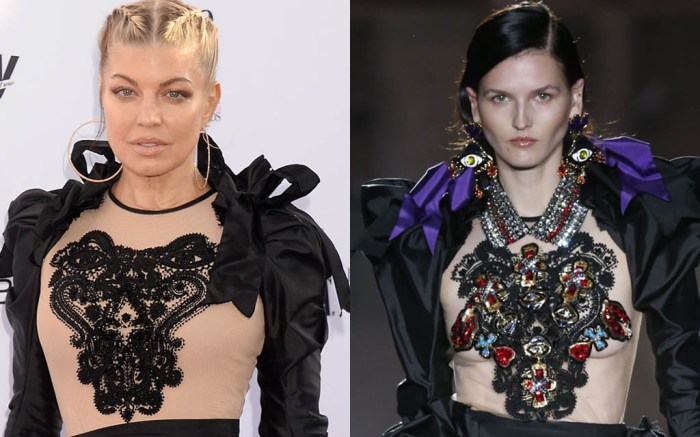 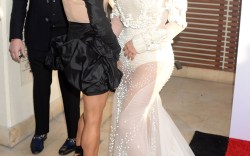 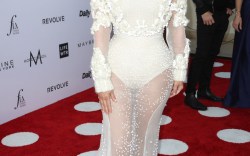 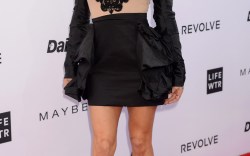 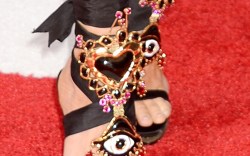 Fergie took a look from the runway and made it her own on Sunday at The Daily Front Row Awards in Los Angeles.

The singer hit the red carpet in a head-to-toe ensemble by Dsquared2 that included a ruffled mini dress and sandals from the label’s spring 2017 presentation at Milan Fashion Week.

However, the shoe designer opted to play by her own style rules for the star-studded ceremony. Fergie’s version of the look did not include the rich colors, intricate design and other details that were sent down the runway. Instead, she went for a pared-down version of the style.

As for the heels, she removed some colors from around the eye ornaments and straps.

Fergie posed alongside Kim Kardashian and more boldface name celebrities at the soiree.

Nicki Minaj channeled Rapunzel with extra-long hair extensions that reached below her knees. The rapper rocked sleek blue Versace boots with red laces and chunky red block heels. She teamed the footwear with a black jacket from the brand. Fergie presented her with the Rebel Award during the ceremony.

Click through the gallery to view more of the best red carpet style at the 2017 Daily Front Row Awards in Los Angeles.