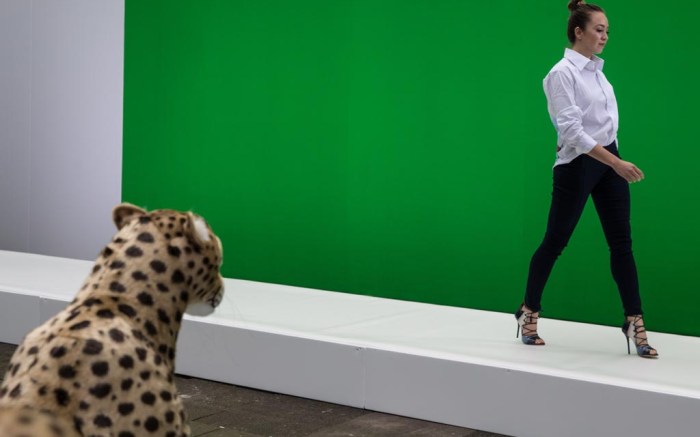 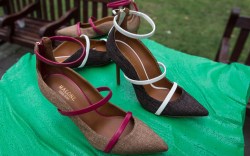 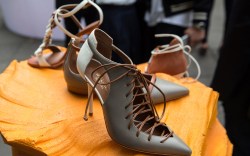 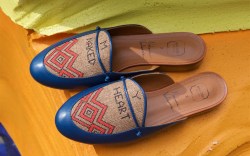 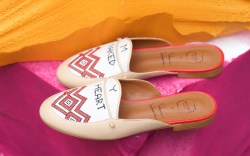 A green-screen catwalk setup allowed guests to walk the runway and be filmed with a pretaped front row featuring designer Mary-Alice Malone and her managing director Roy Luwolt looking on approvingly. An array of their core shoes in multiple sizes were available for participants to wear for their own virtual strut, naturally. An instillation of large leopard replicas played up the catwalk theme this season.

Other theatrical production elements included blue catsuited model greeters and the dramatic arrival of Malone and Luwolt, complete with roving camera crew and step-and-repeat. It all felt more like a sweeping blockbuster premiere than your average poky presentation.

“We knew we didn’t want a traditional show space and that it should be interactive,” said Malone on the initial thinking behind the unconventional format. “We’re not good at doing things conventionally.” How refreshing.

Also on display were Malone’s slew of new diverse collaborations, which included sturdy brogued sandals for Pringle of Scotland (which she described as the biggest stretch for her, aesthetically), lace-up boots for model Natalia Vodianova’s Naked Heart foundation and colourful suede boots for Adam Lippes.

On Sept. 19, they take another turn on the runway, having created the footwear for Roksanda Ilincic’s latest collection. “It’s super-exciting. We feel she is the ready-to-wear version of us — the color, the playfulness,” said Malone, who was also clad in a catsuit and wearing cashmere mules from the fall collection.

What Kendall Jenner Wears When She’s Not Walking NYFW Runways

How Two Of The Buzziest Shoe Labels Stacked Up For NYFW