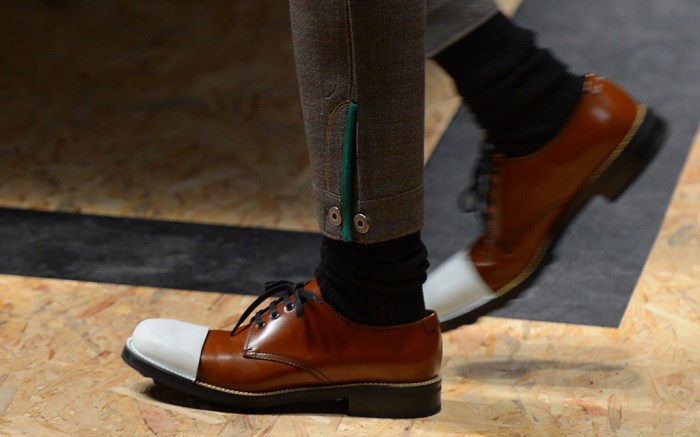 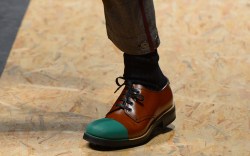 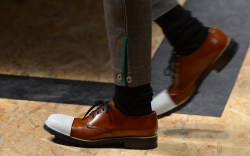 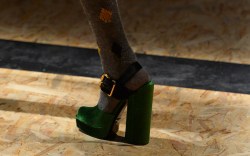 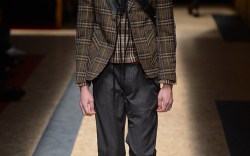 Does it make sense to show men’s and women’s collections on the same runway? A growing number of designers here in Milan are saying “yes,” including Miuccia Prada, who explained her motivation thus: “When working on the men’s collections, I am always interested and very much enjoy investigating the various different ways men and women react to the same idea with total freedom.”

So maybe all the chatter and handwringing about runway shows going consumer is a ruse. Let’s hear it for coed!

Prada certainly made a powerful case with this exceptional show, one of her best men’s wear outings in years. Finally some edge-of-your-seat fashion and a collection that was not only diverse but thought-provoking and captivating with its strong emotional tug.

Who were these proud-looking men and women in their sailor hats, beautifully tailored coats and uniformlike suits, collars and hoods detached, askew and dangling? What kinds of storms, or ordeals, did they weather?

Men’s cap-toe oxfords were both rad and trad. Mixtures of brown and black were more classic, while green or stark white toe-caps were more in line with Prada’s offbeat color choices.

Kiltie monk-strap shoes were done in burnished leathers, from brown to burgundy.

The women’s shoes, meanwhile, offered velvet platforms with a buckle detail. The style will likely carry into the women’s fall show, which will show later this season.

Backstage, Prada said she had reflected on a broad sweep of history: Not the cultural triumphs, but the “bad and difficult periods” that require heroism and passion to overcome. She also thought about “what is happening now,” alluding to the wars, violence and upheavals that are destroying or displacing millions of people. Her show, she said, was the product of “mixing, in a contemporary way, all those impressions and finding a way to make it now.”

She collaborated on prints with Christophe Chemin, a little-known French artist whose allegorical drawings — splashed on Fifties camp shirts for him, romantic smocks for her — question and remix history. For example, one in blue pencil, titled “The Important One,” muses on fame, incorporating Hercules, Sigmund Freud holding a stick, Nina Simone in boxing gloves and Che Guevara holding an Oscar.

These densely layered images were echoed in the wealth of new shapes, combinations and details that filed through a multitiered set of wood particle board constructed to evoke a theater or public square. The men wore multiple variations on naval dress, from small, waist-cinched jackets to dramatic capes and handsome officer coats. The flyaway collars and hoods — in shirt fabrics, stiff leather or shearling-lined denim — look like the 2016 version of Prada’s hit fur tippets of yore.

As the show progressed, the clothes accrued folkloric embellishments and homespun touches like hand-knitted or shearling elbow patches. For the most part, Prada employed sturdy and simple materials: Leather for popover shirts and slouchy pants; denim for slim coats or capes, and checkered wools for snug, vaguely Seventies blazers. Pants were uniformly cropped and sometimes awkward in that deliberate Prada way.

The women’s ensembles closely echoed the wayward, windblown sailor allure, sexed up with high heels and patterned tights. There was a suite of suavely draped satin and velvet dresses with Forties airs — that decade’s influence gathering momentum this pre-fall season — all demure except for their open backs.

Asked backstage if she intended the show’s somber tone, Prada responded with her inimitable approach to fashion: intellectual yet frivolous. “Deeply serious and deeply human,” she replied. “Trying to understand mankind’s difficulties and what we have to face and what we have to do. But also trying, I hope, to make it nice.”