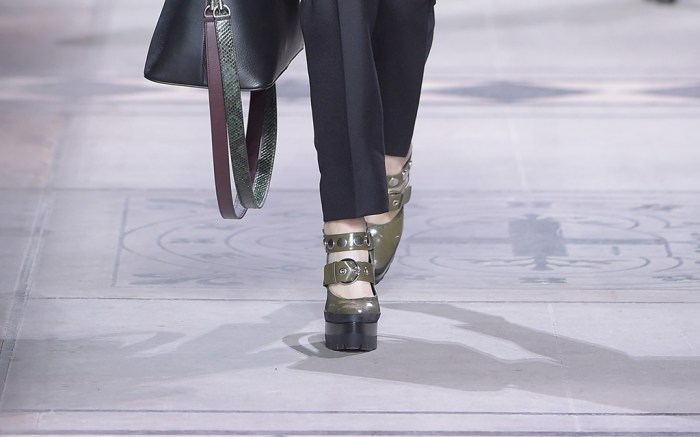 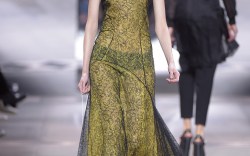 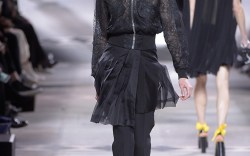 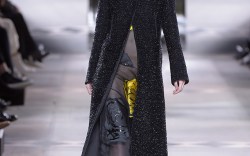 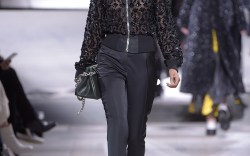 The Mood: Anticipation, furthered by the high-drama gothic setting of Guildhall’s Great Hall. It was a notable contrast to Mulberry’s former shows at Claridge’s, which were more high-tea fairytale in attitude.

The Shoes: The chunky lug-soles that Prada popularized last season plus Burberry’s way with British codes (here it was broguing and wing tips) seemed to heavily influence these substantial platform heels and flatform oxfords. Sure, the addition of pylon orange and yellow jumbo lacing differentiated some, but the best versions were done in black and white, spectator-style, with nifty gold buckling for a regiment finish.

The Verdict: It’s been a few long years now since Mulberry’s last creative director vacated the role. Without a guiding force (nor It-bag since the Bayswater and Alexa) the brand has faltered and stocks took a sharp hit. New designer Johnny Coca (formerly of Céline) was given a luxurious year since his appointment to recalibrate what it might mean to be a Mulberry girl now. That never happens in fashion’s current speed spin-cycle. His answer: gone with the gamine, enter a tougher character, which he referenced in show notes as being a “dark romantic at heart.” And what about sole? Handbags (Mulberry’s bread and butter) are no longer as hot of a commodity as they were a few years ago, with footwear sales outpacing them in the industry as a whole. Smartly, Mulberry is placing a new emphasis on shoes by partnering with Onward Luxury (who also have Proenza Schouler, Jil Sander and Chloe in their roster) for production. It might not happen overnight, but let’s see if they can recreate Mulberry’s accessory magic below the ankles this time around. The odds, like Coca’s towering heels, are stacked high.

Click through the gallery to see the full Mulberry collection.

House of Holland RTW Fall 2016 Shoes On The Runway