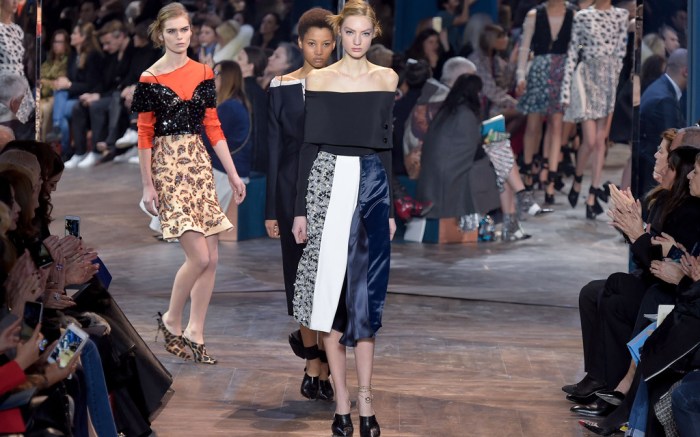 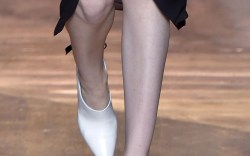 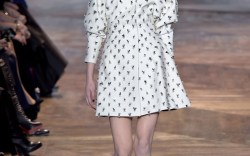 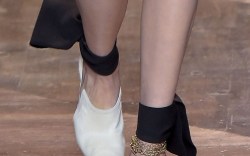 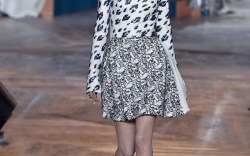 During the John Galliano era at Dior, couture became an extravaganza of extreme silhouettes and dense embellishments — so much so that models often had to be helped off the end of the runway.

On Monday, studio directors Serge Ruffieux and Lucie Meier, who had headed fall and spring ready-to-wear and the couture studios, respectively, under Simons, stepped into the spotlight with a collection meant to further push the wearability agenda. “Couture’s new realism,” the show notes declared.

The venue, a mirrored tent of many angles, seemed to send a subliminal message: that at chez Dior, the client can recognize herself.

Despite changes in the creative team, footwear designer Francesco Russo was still in charge of the shoes here. Pointy leather pumps had oversized wrap-tied bows around the ankle. Some looks had silver chains styled around the ankle, dangling a single silver eyelet.

The blistering pace of the show, meanwhile, heightened the spontaneous character of some of the clothes while transmitting another idea: Couture — it’s for women on the go.

The collection was cast from the same modernist mold as it was under Simons, reprising his jumble of paneled embroideries and streamlined takes on the Bar jacket, here enlarged into a hip-length camel coat, or elongated into a narrow black one, under which pleated ruffles undulated.

Silk skirts, while past the knee and straight, came with slits, swags or panels of pleating that gave them a seductive movement. Shorter, A-line skirts also came with extra folds of fabric, winking to the fan-skirted New Look that caused a sensation almost seven decades ago.

During a preview, Ruffieux and Meier cited a strong complicity and a freewheeling approach to interpreting the archive, emphasizing a “wardrobe of pieces” to give women freedom. Noting that Dior was known for striking décolleté, they engineered coats and evening dresses that slipped intentionally off the shoulders as a gesture of Parisian seduction.

These often registered as forced on the runway, in contrast with their easy-to-wear ethos. On the plus side, they pointed to a heightened femininity that suits the storied house. To be sure, some of the dresses were striking, including a barely there lilac chiffon gown with two sewn-on ruffles and a smattering of embroidery.

A series of short black tulle dresses with plunging necklines were abstractions of Dior’s 1949 Junon gown, with its ombréed petals, here abstracted into small sprays of tulle sheltering 3-D embroidery.

At the end of the show, Ruffieux and Meier came out for their bow — and then five more members of the studio spilled onto the runway. The team has also been conscripted to realize the fall 2016 ready-to-wear show in March, awaiting the arrival of Dior’s seventh couturier, fashion’s latest $64,000 question.

[With contributions from Christian Allaire]

To explore the collection, click through the slideshow below.

Atelier Versace Spring 2016: A Closer Look At The Runway Shoes