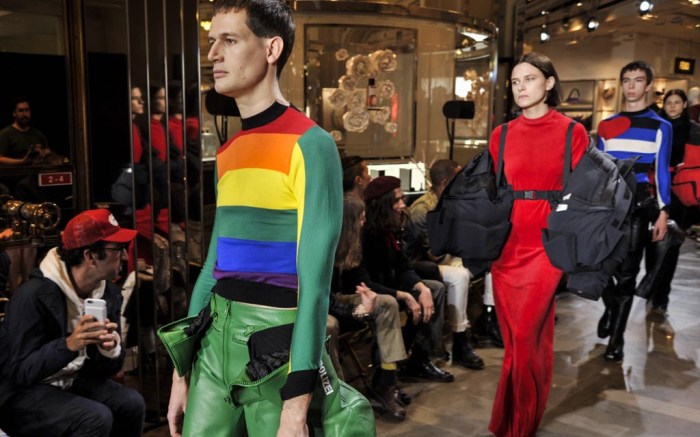 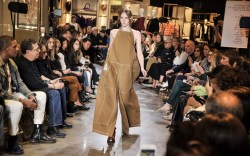 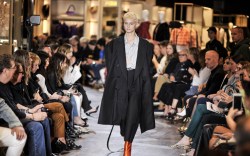 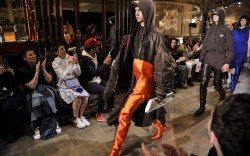 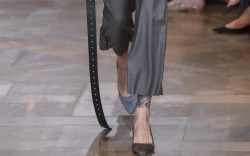 Joining the couture schedule with his Vetements label, Demna Gvasalia brought doses of grit and subversion to the tony week, replete with young groupies, a blast of thrash metal — and sly humor.

Gvasalia hijacked the designer floor of Galeries Lafayette while the giant department store was still open for business. As might be expected given the designer’s uber-cool factor, the scene outside resembled a nightclub as would-be crashers jockeyed with top editors to gain entry to the landmark store. Those who got in found that the designer had conscripted 18 brands to collaborate on his collection, including Levi’s and Carhartt to Mackintosh and Comme des Garçons Shirt. Some, such as Champion, he had already appropriated and thrust into the realm of the $650 sweatshirt.

Hooking up with the likes of Church’s and Brioni was a route to simplifying production of the women’s and men’s ready-to-wear collections as Vetements showed three months earlier than usual. The brand is to parade fall collections during Couture in January, signaling another new route in an overheated fashion system in the throes of a major correction.

“For us, the Couture approach is to use the know-how of these manufacturers,” Gvasalia explained. “For example, Schott does the best biker jacket. We want to keep working with them as it’s an interesting way to grow.”

Fair to say that Canada Goose has never made a bigger or more demonstrative puffer jacket, and that Manolo Blahnik hasn’t made satin boots as high as hip waders, worn with equal attitude by men and women.

The show had the usual electricity, as models raced around the central cupola past stands for Fendi, Cartier and the Apple Watch. Silhouettes pinged between supersize bombers and trenchcoats sliding off the shoulders to tiny jean Levi’s jeans jackets and hunch-shouldered hoodies.

Gvasalia’s list of garments — his staring point for all collections — still included big shirts, now twisting around the body, buttons gaping open here and there. Tailored jackets and coats were still huge, wrinkled and slightly off-kilter in that Margiela-esque way.

New to the list were Nineties track suits by Reebok, shrunken for the guys and billowing for the girls. The women’s clothes, which included austere, borderline transparent jersey dresses, overshadowed the men’s collection — a warning light for brands going down the co-ed route.

That Vetements could rule the roost at Galeries Lafayette on a rare day of Sunday trading speaks to its clout. The retailer does not even stock it — at least not yet.

Click through the gallery below to see the Vetements couture fall 2016 collection shown during Haute Couture Fashion Week.