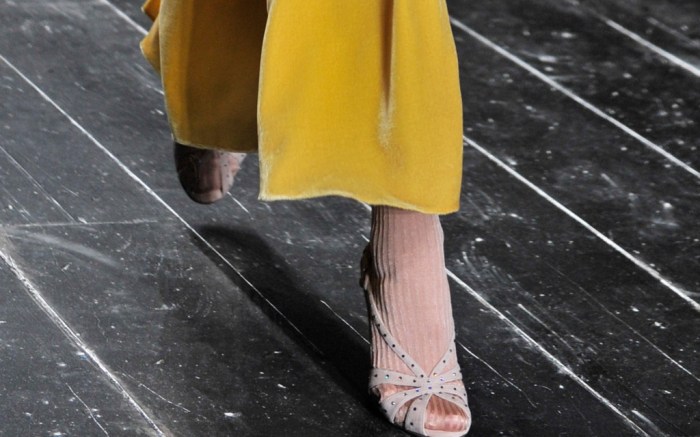 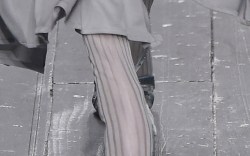 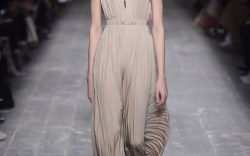 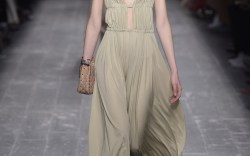 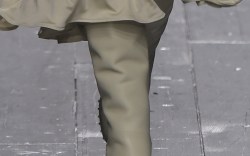 The Mood: Wearable folk art — with a dash of glitz. Designers Pierpaolo Piccioli and Maria Grazia Chiuri presented a collection of folkloric prints in muted, washed-out fabrics. Sheer gowns had turtleneck silhouettes, or revealed skin via thin spaghetti straps. As the collection went on, more embellishments and shine were added, making for an exit filled with dreamy ruffled numbers that glimmered as models walked.

The Shoes: Much like the mostly colorless aesthetic of the clothes, the footwear blended instead of standing out. Strappy slingback sandals were embellished with tiny crystals and paired with similarly-hued ribbed socks. A new Rockstud shoe was introduced, a leather ballet flat with studded Mary Jane strap. The Mary Jane was also offered in a pale pink with heel and studded midsole.

The Verdict: Valentino’s ethereal look continues on. New? No. Beautiful? Very much so. Very few designers offered a shocking collection this season — Chanel did its tweed, Saint Laurent did the 1980s. It was refreshing to see fewer flats here, at least, as we haven’t seen a Valentino heel on the runway for a few seasons now.