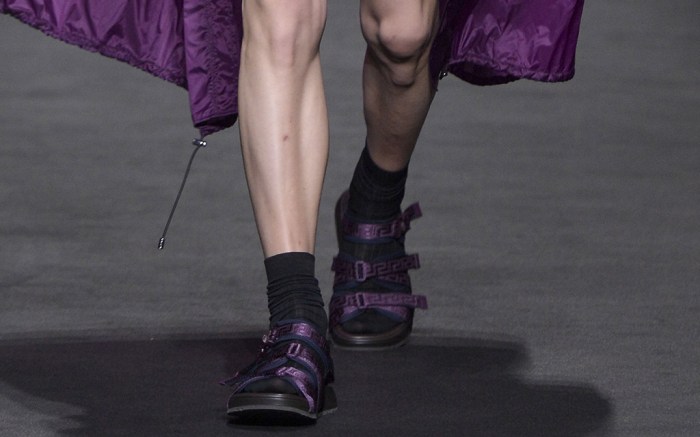 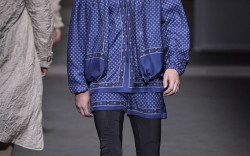 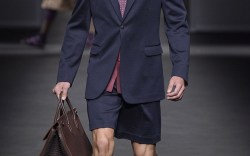 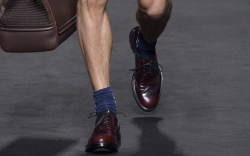 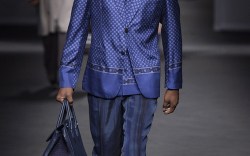 The Bruce Weber and Versace relationship is reborn. The Italian label’s spring ’17 show in Milan opened with a short film by the iconic photographer, who produced many of Versace’s ad campaigns in the height of the 1990s. It featured Chicago-based hip hop dancers and supermodels like Karlie Kloss and Gigi Hadid busting a move. Considering the collection’s athletic focus, it was meant for movement, the film was especially on point.

The shoes featured a number of athletic-inspired shapes. High-top sneakers had sculpted rubber soles that almost read as running shoes. Socks and sandals, a recurring theme for Versace, were done with strappy Velcro styles this time. These were pared against a number of sporty ready-to-wear looks — techy anoraks, silk trenches, hoodies and leggings (even for men, yes).

Surprisingly, the collection was pared down this season overall. You think of Versace and you think of the loud, the flashy, the flamboyant. Here, the color palette was on the dark side — beiges, dark reds, blacks — and the shoes also featured a number of classic dress styles. We’re taking plain black lace-ups here. But it being a Versace show, a little glitz had to appear somewhere: the dancers in Weber’s video all wore the label’s high-top with gold Medusa emblem.

Bonus points: Donatella Versace played Prince music throughout the show as a tribute. Not a bad soundtrack to dance to, indeed.