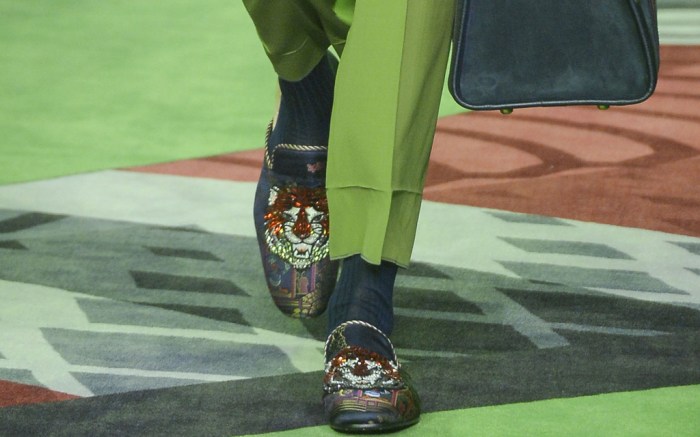 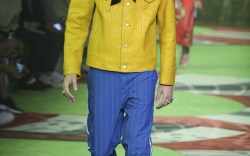 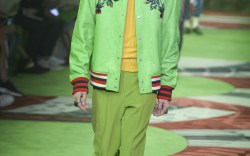 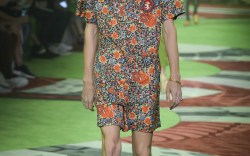 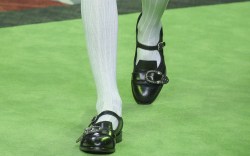 “I hate to travel,” Alessandro Michele confessed backstage after another sensory overload of a Gucci show. “You don’t have to take a plane. You can just get on the subway.”

One can imagine Michele only has to close his eyes to take a trip, imagining sailors, Ivy Leaguers, maître ds in China – or even Donald Duck, a favorite character from his childhood who often assumed a sailor guise and had that itch to discover the world.

All of those characters, plus geeks galore, populated his spring runway; this season, a giant snake carpet laid out in a vast, lime green room that shuddered as the stirring Sarah Neufeld reached a crescendo.

If the collection succeeded, it’s because one could feel the sincerity of Michele’s eccentric, decorative impulses as he splashed floral and dragon embroideries across suits, silk robes and varsity jackets, along with affecting slogans such as “Blind for Love.” His sailor sweater with a bandanna motif, and Donald Duck souvenir jackets, are bound to trump many other collections in the street-style sweepstakes next season.

Michele eased up – slightly – on the embellishment front, opening the show with a spare, ladylike coat in a verdant shade one might see on Queen Elizabeth. It was paired with cropped pants in a dusty, thrift-shop pink, lace hose and loafers.

He also tempered the androgyny a touch, including shorts and pants with boxer and baseball airs, and groovy bleached jeans like the ones Jared Leto wore, sitting front row with his ramrod posture next to English singer Olly Alexander.

As always, Michele included about a dozen women’s looks, parading familiar granny dresses and a tiered tulle skirt topped with a black hoodie with “modern future” written in a heavy-metal script. Styled with hats or sculptural helmet hair, these exits were strong and almost overwhelmed a solid men’s effort.

Starting next year, Gucci plans to show men’s and women’s collections together. It will be interesting to see how Michele navigates that maiden voyage.