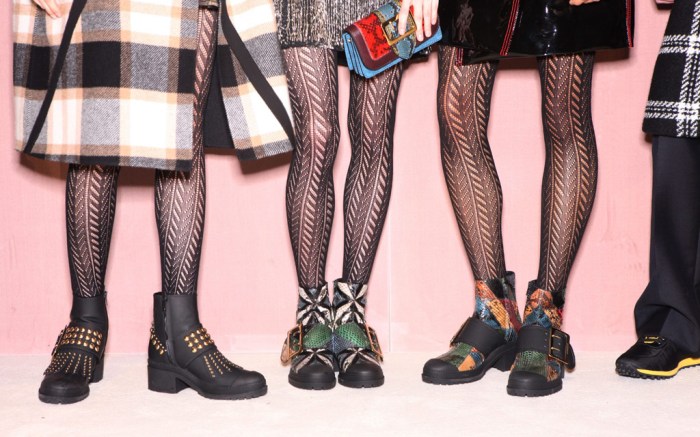 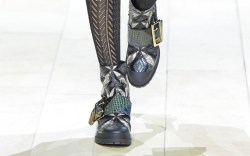 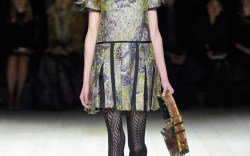 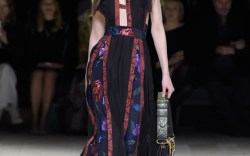 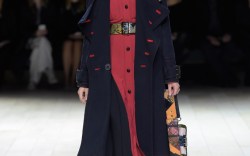 The Mood: End scene. With news that Burberry will now show seasonless men’s and women’s collections together starting in September and make its collections available directly to consumers directly afterwards, a palpable “one last hurrah” hung in the Kensington Gardens show space, which itself had a curtain-call innuendo, swathed in blush velvet drapery. Designer Christopher Bailey brought in singer Jake Bugg to provide the acoustic soundtrack.

The Shoes: It was all about the moto boot, which came updated with a slight heel and large pilgrim buckle for added polish. Multiple iterations incorporate studding, kilties, brocade and python patchwork as well. A few were even revved up in brocade. Men were styled as gym class heroes in sequin track jackets and retro black runners with contrast soles.

The Verdict: Like Burberry’s daring new sales and show model, the boots this season had an urgency to them. With their tomboy attitude and little lift, they weren’t revolutionary, but more importantly in this case, they were just the thing to wear for this very moment. The brand places much emphasis on pushing its bags, which, truth be told, have never been game-changers or incredibly covetable. Considering that all its check-lined trench needs each season is killer footwear, the company would be clever to join the current industry hoopla for all things shoes.

Click through the gallery to see the full Burberry fall ’16 collection.