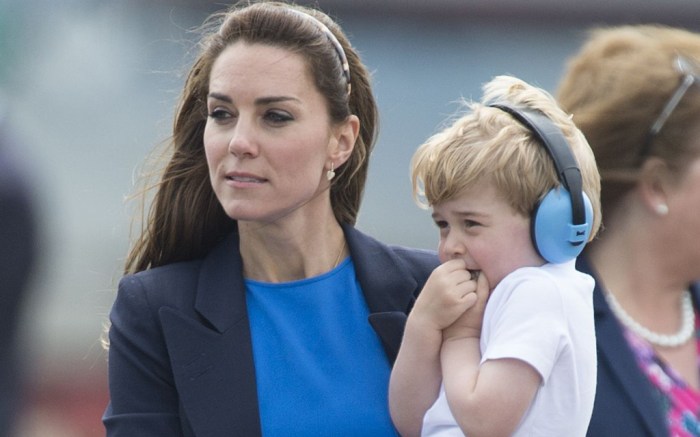 Kate Middleton brought out her practical L.K. Bennett heels on Friday for a visit to the Royal International Air Tattoo at the Royal Air Force Fairford in Gloucestershire, England.

The Duke and Duchess of Cambridge brought along their son, Prince George, who turns three this month, to see some airplanes and helicopters. The family sat in the Squirrel helicopter that the duke trained in during his time in the RAF.

Taking a closer look at a @royalairforceuk Squirrel helicopter, which The Duke trained upon at RAF Shawbury in 2009. The Duke and Duchess of Cambridge and Prince George are attending the spectacular Royal International Air Tattoo today.

Middleton held George’s hand as she brought him around the airfield, wearing her go-to nude L.K. Bennett Fern pumps that we’ve seen her wear several times.

George wore Trotters’ canvas buckled shoes in navy blue. The tot notably wore the brand’s velvet slippers when he stayed up past his bedtime to meet President Barack Obama and first lady Michelle Obama in April.

Middleton has made several major appearances this week. On Wednesday, she wore a surprisingly affordable pair of Schutz sandals for an event at the Natural History Museum in London. The duchess wore Rupert Sanderson pumps to take in Serena and Venus Williams’ matches at Wimbledon on Thursday.

Click through the gallery to see more of Middleton’s standout shoe style.