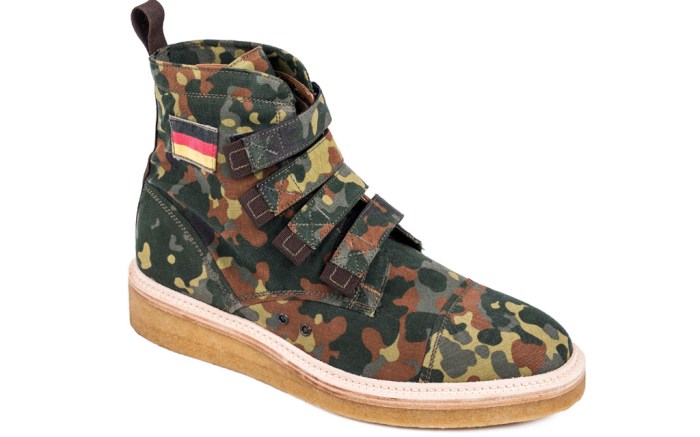 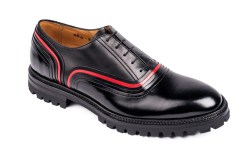 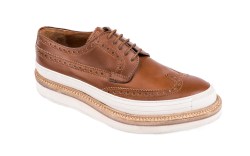 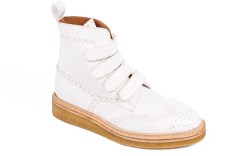 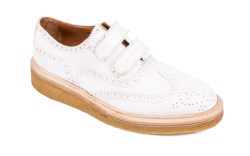 Who would have guessed that soccer and skateboards would be the common factor when Matthias Weber, Niklaus Hodel and Florian Feder met while studying fashion at the Royal Academy of Fine Arts in Antwerp, Belgium.

“It’s very rare, because normally guys who study at a fashion school don’t share an interest in these kind of things,” Weber said, laughing.

Originally from Germany and Switzerland, the trio saw early success for their designs — even before founding Weberhodel­feder (also known as WHF). Designer shoe store Coccodrillo in Antwerp placed an order for the label’s now-signature Velcro high-top after spotting it in Hodel’s 2012 graduation collection. The sneaker quickly sold out in most colorways.

“The Velcro model shows the key element we work with — taking a traditional shoe and giving it a new twist with sportswear influence,” Weber said, adding that for fall ’16, the style got a facelift via cut-up vintage military jackets from Germany and a faux fur lining.

Production is split between Portugal and the Italian shoe centers in the Veneto and Marche regions. The line retails from $520 for a leather laceup to $1,200 for traditional and bespoke models.

Weber noted that there is “no limit to the sky” regarding prices for shoes, but added that WHF is introducing a lower-priced version of the signature Velcro design that will retail for around $320.

Since scoring that first success with Coccodrillo, the founders have opened a showroom in Paris and signed other major fashion retailers, including Colette in Paris, La Rinascente in Milan and Dover Street Market.

Looking ahead, WHF, which also consults for other brands, doesn’t have a long-term plan but hopes to maintain its early momentum, banking on steady demand for its designs.

“We want to develop Weberhodelfeder step by step and, of course, grow, but in a healthy way that [allows us to] continue to make beautiful shoes,” said Weber.

Click through the gallery to see more styles from the WHF collection: