How One Charity Is Working Tirelessly In Honduras 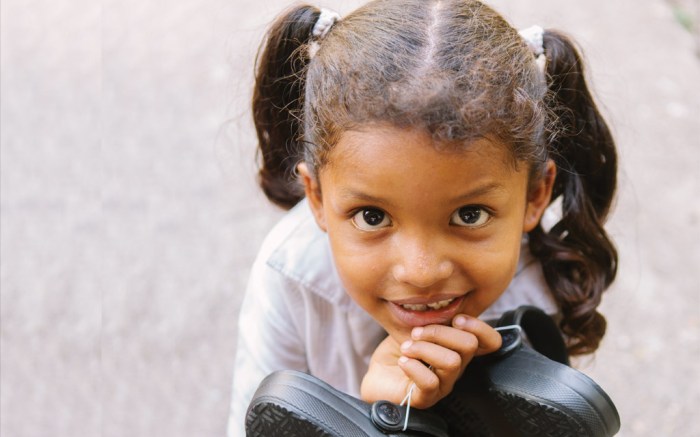 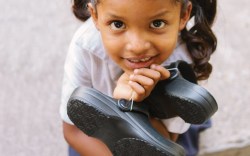 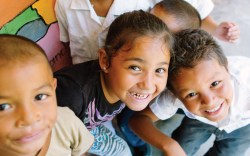 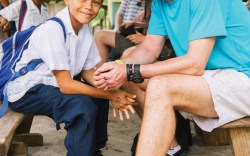 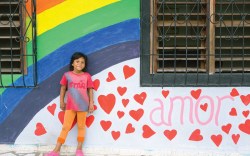 In the rural outskirts of Santa Rita, Honduras — where safe drinking water has been scarce for many years and some families don’t have beds — a single mother of four is acting as the “jefe,” or town leader, in Remolino.

Tracy Maldonado walks with purpose and wears an immeasurable smile on her face. While her children wait in line for a pair of shoes from Soles4Souls, she talks confidently about her visions for the future and dreams of improving the quality of life for her family.

“I don’t have limits,” said Maldonado, as her son ran up to her proudly displaying his new shoes. “You never know if you’re going to have just one opportunity in this life, so you have to go after it if it crosses your path. I’m thinking about going forward and going far.”

Maldonado is a member of the nonprofit organization’s microenterprise program, which has become the charity’s major focus in its 10th year.

The budding entrepreneur receives one shipment containing 20 to 60 pairs of shoes each quarter to sell to her community. Her earnings are then used to provide basic necessities to her family and other locals.

“The quality of life is getting better with this opportunity,” Maldonado told this Footwear News reporter, who traveled to Honduras for a four-day journey with Soles4Souls to experience its poverty-fighting work firsthand. “This [program] is supplying different kinds of necessities. It can be food; it can be medicine. My vision now is to build a house and provide a different life for [my family].”

Her influence is strengthened by the support of Raul Carrasco, microenterprise partner for Soles4Souls, who provides the shipments along with the necessary training and selling skills.

“It’s not easy to start here,” he said. “[Tracy] is positive and proactive. In the future, she can open a little store.”

In fact, this could mark the beginning of a new chapter for Soles4Souls as well. “My vision is being able to say yes to Tracy about [getting more shoes for a store]. We can make a real impact,” said Soles4Souls president and CEO Buddy Teaster. “To see a woman with a [challenging] life say ‘I don’t have any limits,’ you’ll see her make it happen.”

Teaster, who has been with the organization for three-and-a-half years, was in Honduras for the second time, curious and eager to see the group’s microenterprise program in action. He traveled alongside outreach and travel coordinator Tiffany Johnson, who was on her seventh trip to Honduras after eight years with the company.

“This was my first trip with Buddy,” said Johnson. “He really gets down in the trenches with the people, and I loved seeing that.”

Natalia Mendez, a woman from Villa Soleada who typically has a full house of 10 people, was already hard at work when Teaster and the team arrived. Mendez had set up eight pairs of shoes on the stairs of a street corner, and during a 30-minute visit, she completed two sales.

“I can use the shoes as a launching project for other things,” she said. “My biggest dream has been to create a food kitchen for the youth in the community.”

But her dreams don’t stop there. “By helping provide us with those shoes, you’re not just helping us, but helping us to teach our youth and giving us a fuente of trabajo [fountain of work],” said an animated Mendez, who added that she also hopes to open a retail store with shoes.

For his part, Carrasco is excited about the “beautiful opportunities” ahead for microenterprise and the six women in the program.

“In the past, the communities were just waiting for things, and now they understand that they can’t just wait. It’s a big evolution,” he said. “We can change houses and floors and roofs, but to change minds is complicated. A lot of the villages here are receiving things and organizations are helping, but now we also create opportunities to work.”

Copprome, an orphanage outside of El Progreso, is also an integral part of the nonprofit’s work in Honduras. The organizations have worked together since 2011, and the orphanage benefits from donations and its microenterprise programs, which now make up 60 percent of Soles4Soul’s efforts.

Outside Copprome, the bright exterior is adorned with a mural featuring rainbows and hearts — and the tagline reads “el amor no conoce fronteras,” or “love knows no boundaries.”

Still, despite the upbeat atmosphere, the orphanage faces huge challenges. For example, it can’t meet minimum salary laws for its employees.

But Oscar Sanchez refuses to get discouraged. As one of the directors, he has made significant changes and talked openly about his hopes for more improvements at a place he calls home. Sanchez has lived in the area since he was 4 years old. “I recognize all the opportunities Copprome has given me and all the bad things it kept me away from being on the streets,” he said.

The orphanage houses around 50 boys and girls, and it also operates an external sponsorship program, which works to provide items such as shoes and uniforms to more than 200 families.

“The Soles4Souls shoe project is important to the existence of Copprome,” Sanchez said. “It reduces the costs for certain things, helps us become more self sustainable, and we can cover some costs through the sales of the shoes. We always try to involve all of the children in the activities we are doing so they can be proud of where they came from and feel a love for their area.”

As the director spoke, tears welled up in his eyes. “This work I do for love,” he said, then told the group: “We want to profoundly thank Soles4Souls for helping — you are like angels to us.”

Johnson said that even though Soles4Souls is still in the early stages of the microenterprise program across Honduras, the movement is proving to be a powerful one.

“Through Raul’s work, we have more of a connection,” she said. “We are teaching business and community involvement, life skills. It’s so much more than shoes.”

Of course, shoes were still a huge part of this journey through Honduras. The group gave out about 600 pairs in total to children in need, as well as select women and men. One morning distribution took place in the village of Las Crucitas, in the outskirts of El Progreso. To get there, the group of 10 piled into the van to trek to the top of a mountain, and
traveled along an extremely rocky road.

At this particular location, in addition to fitting the kids with new shoes, the group washed the children’s feet. After receiving Bobs clogs by Skechers, the children patiently waited in line to have their shoes decorated with markers — they requested roses, flowers, snakes and even tigers to be sketched on the shoes.

“When we drove up the crazy road to Las Crucitas, the [children] were in uniforms, running around playing with bubbles,” Teaster said during a later conversation. “In the midst of what could seem like chaos, they don’t succumb to all of it — they find a way to bring order to it.”

On the way back down the mountain, Johnson spotted a sign that advertised honey for sale. When Soles4Souls stopped by, the group discovered that the father took a two-hour Internet course to learn how to sell the product. Thanks to his resourcefulness, all four children, who were with their father, are in school. Sensing she could help more, Johnson spontaneously went to the van to get four pairs of shoes for the kids.

Finally, on the last day of the trip, the group traveled to the village of Tornabe, where they stopped to donate shoes to children. When Johnson didn’t have the right size for one young boy, she gave the sneakers off her own feet. (According to Teaster, she does this often.)

In Tornabe, the group was ready to give out about eight pairs of workboots from Keen. Unfortunately, there were not enough shoes for all the men who arrived.

“There was no way to control the crowd, but instead of making a rush for it, they decided among themselves who would get the shoes,” said Teaster. “It was a beautiful thing.”

Johnson added, “The men made their own pecking order; it was like they knew who needed the shoes most. It was so organized and neat to watch.”

While Soles4Souls is passionate about Honduras and its work there, it aims to expand to many other major areas. Haiti, the Philippines and Moldova (in Eastern Europe) are focal points for the organization. To do that, Teaster said he will need the footwear industry’s support even more.

“The demand is way beyond our capacity right now,” he said. “Every company [in the industry] can help make a difference, without cutting into what they are doing.”

Teaster is eager to plot a strategy that would help take the microfinance program to the next level. “How do we double our impact? Giving away shoes feels good, but we need to get much more serious about microenterprise and job creation,” he said.

Back in Honduras, hopes are high for the future. “We can impact [the area] — this can be crazy good,” said Carrasco. “Communities in Honduras have never had this kind of opportunity. I don’t think people receive that kind of a chance. “The next generation can be different. Maybe I’m a dreamer, but we are working for that.”