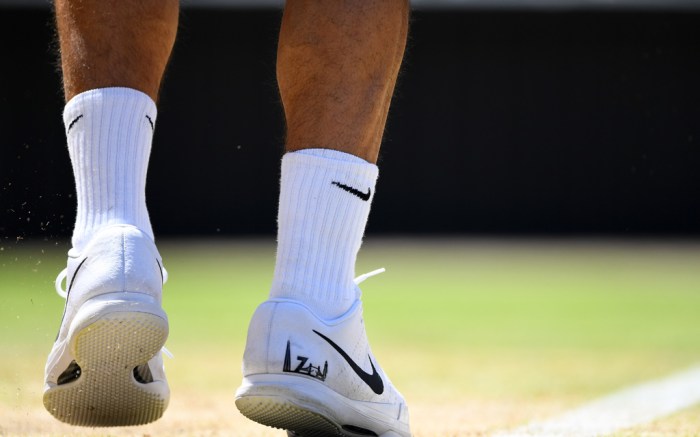 Roger Federer is marching toward his eighth Wimbledon title in London, and his shoes might be serving as good luck.

On Wednesday, the tennis star rallied from two sets down and prevailed in three nail-biting match points to beat Croatian Marin Cilic and head into the semifinals. The No.3-ranked Federer wore his new NikeCourt Zoom Vapor 9.5 Flyknit sneakers, but with a special detail for Wimbledon.

On his right shoe, there is a black London skyline that features the number 7, representing his seven Wimbledon titles. Nike has been customizing Federer’s shoes for Wimbledon with his number of titles each year. He last won at the All England Club in 2012, previously winning five straight titles there from 2003-07 and then again in 2009.

In 2010, Federer wore the New York City skyline on his shoes at the U.S. Open.

If Federer wins his eighth title, he’ll surpass Pete Sampras for the most Wimbledon titles in history.

After his win against Cilic, Federer posted this tweet:

Centre court felt alive. Thanks for the support 💪🎾🚀🤖👊 pic.twitter.com/0mNkSCNIeR

Federer on Friday is playing Milos Raonic in the semifinals.

Click through the gallery to see more of Roger Federer’s Nike shoes.

Wimbledon 2016: Sneaker Style On The Court