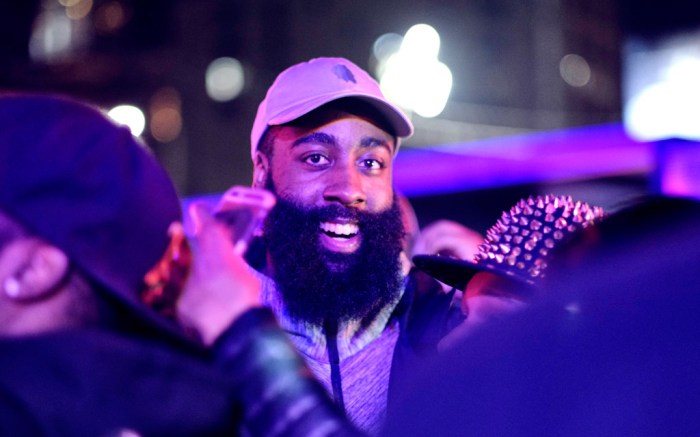 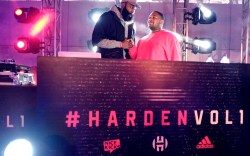 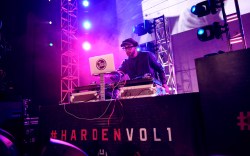 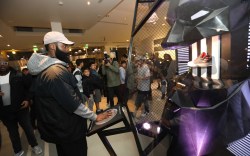 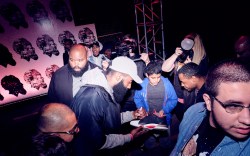 There was a lot of fanfare around the country on Saturday for the release of James Harden’s Vol. 1 Adidas signature basketball sneaker, but the most noise was made in L.A. at trendy sneaker boutique Nice Kicks — with Harden himself holding court at a block party that wrapped his day of surprise appearances at West Coast retailers for the debut.

“It’s a dream come true — it’s a blessing to have my own signature shoe,” the Houston Rockets athlete told a crowd of fans onstage at a special outdoor interactive zone. “It’s been nothing but a whirlwind, but it’s been fun.”

The event — open to the public — supported Adidas’ launch of the “Pioneer” iteration of Harden Vol. 1, available for $140 on Adidas.com, Nicke Kicks, Foot Locker, Eastbay and at select retailers. Additional colorways will be dropping throughout the season.

Along with the kicks, Harden’s companion apparel collection debuted, featuring several T-shirt styles emblazoned with the bearded baller’s silhouette and abstract graphics, which were available gratis for fans and included customizable design options.

The downtown L.A. sneaker boutique made good use of its slick digs, transforming the entire retail floor with Harden’s shoes and Adidas’ campaign art in addition to utilizing its outdoor lot that lured revelers with free bites from popular food trucks and performances by Harden’s favorite mixers, including DJ E-Rock, DJ Justin Credible, DJ Mustard and DJ Bad Ash.

Ahead of the evening kickoff party, Harden dropped in on fans in Santa Monica, Calif., at Adidas and Foot Locker stores, where he picked up the tab for customers who were waiting in line to purchase his sneakers.

The design incorporates a black knit upper, white leather toe shroud and red accents. The championship date, “March 24, 2007,” is emblazoned on the left sockliner with Harden’s game stats on the right sockliner. The sneakers utilize BOOST cushioning for energy return, and the premium toe-shroud design was developed to protect him from defenders stepping on his feet. The asymmetrical lacing eliminates pressure on the top of the foot.

Click through the gallery below to see more photos of Harden’s activations in Los Angeles, New York City and Atlanta.