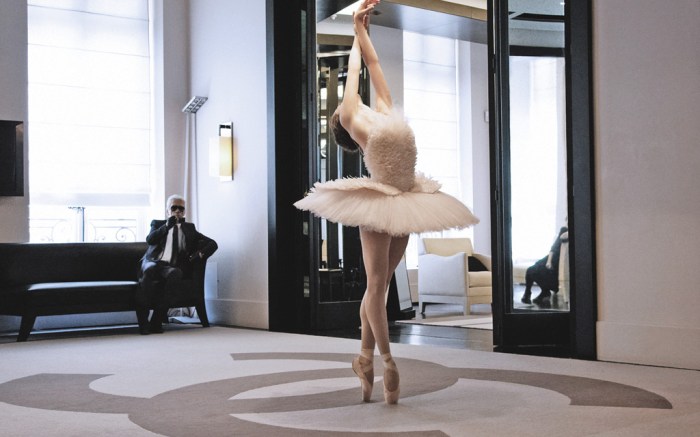 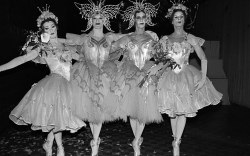 In 2009 in the Chanel atelier in Paris, dance and fashion came together in a most magnificent way.

Chanel designer Karl Lagerfeld, along with three seamstresses in the atelier, had created a custom tutu for Elena Glurdjidze, a senior principal dancer in the English National Ballet. When Glurdjidze went to the atelier for a fitting, she gave an impromptu performance from “The Dying Swan,” the show for which the look was designed.

The result? A photo that shows Lagerfeld watching intently as Glurdjidze dances gracefully in her spectacular tutu. It was constructed from more than 2,500 feathers and took the seamstresses 100 hours to make.

“[Your costume] is 50 percent of how you are going to dance,” said Glurdjidze at the time. “It is very important to have a beautiful costume.”

These photos are just some of the many impressive ballet images we found in our Fairchild Fashion archives that exhibit the fondness fashion has for dance. Through the years, dancers from the New York City Ballet have posed for fashion spreads in Women’s Wear Daily and Menswear magazine.

We also dug up a shot of the Trockadero Troupe — a drag group that parodies classical ballet — performing during Giorgio Armani’s party at Studio 54 in 1980, and dancer Rudolph Nureyev attending a fashion show to benefit the restoration of the Palace of Versailles in 1973.

In 2010, designer Talbot Runhof had a ballerina dance down the runway for his collection.

And in 2014, jewelry designers Danielle and Jodie Snyder commissioned American Ballet Theatre members to dance around a boxing ring bedecked in elaborate crystal jewelry from their line, Dannijo.

Even one of the biggest tech companies has been involved with ballet. Earlier this year, Google brought on dancers Troy Schumacher and Ashley Laracey for a performance celebrating Google’s collaboration with artist Jeff Koons.

Explore the gallery below to see more archival ballet images.