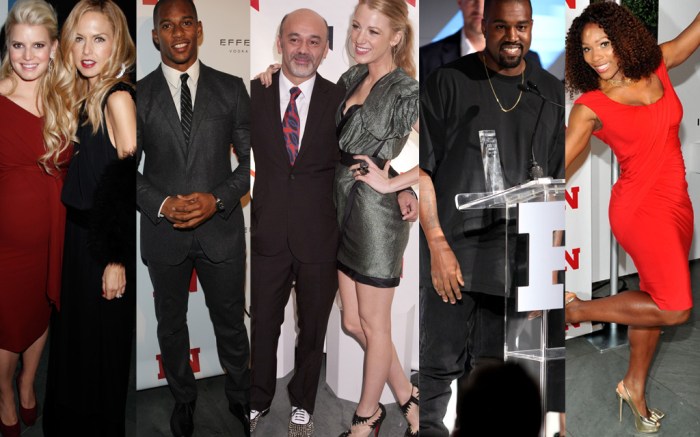 The Footwear News Achievement Awards are often called the “Shoe Oscars” — and for good reason.

The annual event, which honors the best and brightest talents in the shoe and fashion industries, brings out some of the biggest names in the business and their loyal supporters.

Last year, singer and shoe designer Fergie opened the show, which included a must-see, long-winded speech from Kanye West, who was on hand to accept his award for Shoe of the Year for his Yeezy Boost 350 with Adidas. FN also honored Alexa Chung as Style Influencer of the Year and had presenters including Deion Sanders and Sugar Ray Leonard. Although he couldn’t be there, Pharrell Williams gave a shoutout via video for his Collaboration of the Year Award for his Timberland x Beeline collection.

In 2014, Sarah Jessica Parker’s SJP Collection won Launch of the Year, and she was presented with the award by Joe Zee, television personality and editor-in-chief of Yahoo Style.

At this year’s 30th anniversary awards on Nov. 29, we’ll be honoring Rihanna for her Fenty Puma Creeper for Shoe of the Year, Gucci and Schutz for Brands of the Year and Manolo Blahnik x Vetements as Collaboration of the Year. Bergdorf Goodman fashion maven Linda Fargo and famed Italian designer Rene Caovilla will be inducted into the Hall of Fame.

Check out more celebrity highlights at the Footwear News Achievement Awards below.

How Rihanna, Iris Apfel & Linda Fargo Are Being Honored At the FNAAs

Deion Sanders Wows Crowd With Speech For Under Armour At FNAAs