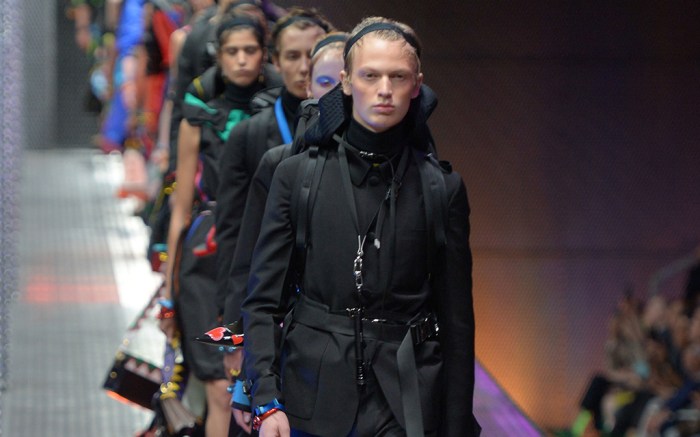 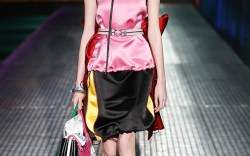 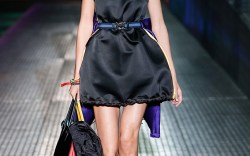 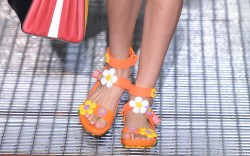 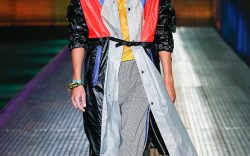 The Mood: Prada’s spring ’17 men’s collection tackled a theme we’ve seen much of this season so far: the modern explorer and urban traveler. But only Miuccia Prada could do it in such a way to make it feel non-derivative and completely new. She paired crisp suits against oversized backpacks, knit sweater vests with splash pants, printed dress shirts with athletic leggings. Simply put: she squashed her competition like an annoying mosquito.

The Shoes: Teva-style Velcro sandals had printed straps, either featuring diamonds or stripes. Some were paired with chunky wool socks, a look that’s pretty much only suitable by the campfire, like the show’s backpacking theme suggests.  Laceless neoprene boots had a single Velcro strap and were reminiscent of water shoes, only these came with pastel pink or baby blue accents (which is just oh so Prada). Crisscross sandals were also done in a high-shine patent that almost looked like a jelly sandal, especially in the hues of bright yellow or orange.

The Highlights: Models at the beginning of the show wore sandals and carried backpacks with dress shoes hanging off of them. As the looks got progressively dressier, the shoes switched and their backpacks started having sandals hanging off of them. A thoughtful narrative. A suggestion the man gets smarter the more he travels. On one of the last looks, a male model even had heels hanging off his backpack — we want to know where he’s heading, or coming from.