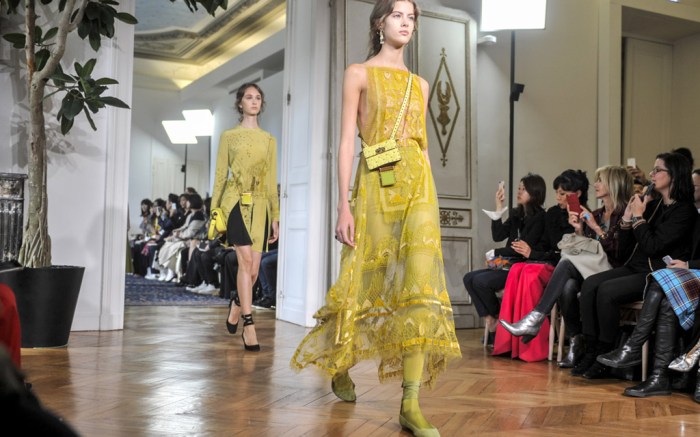 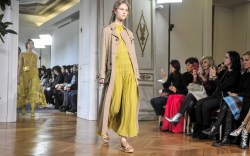 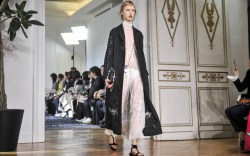 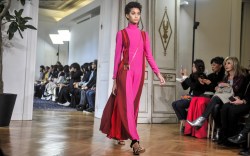 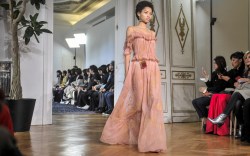 The Collection: After co-creative director Maria Grazia Chiuri departed for Christian Dior last season, Pierpaolo Piccioli made his solo debut at Valentino today during Paris Fashion Week — and he’s focused on opening a new chapter for the Italian label. Piccioli focused on ramping up wearability, with frothy tulles and romantic laces — both Valentino signatures — being reworked into more casual day dresses. Mini-sized cross body bags lent an on-the-go feel to the looks.

But one can’t forget that Valentino is a romantic brand, and he continued that message with a new thoughtful collaboration. He worked with artist Zandra Rhodes to apply prints by Hieronymus Bosch onto some of the pieces, like a long-sleeved sheer dress printed with a scene from Bosch’s “The Garden of Earthy Delights.” Indeed, there were plenty of nature motifs elsewhere, too, like a mesh turtleneck with appliqués of butterflies and leaves.

The Shoes: Much like the clothes, the footwear collection this season championed the idea of easy, luxurious flats. Strappy sandals were minimal and meant to emphasize the foot, some tied around the ankle and done in plush velvets. Suede ballet flats — in springy colors like seafoam green — had wrap-ties around the ankle (the ballerina look often appears in Valentino collections). The no-heels-allowed message is already a major trend for spring, too.

The Verdict: Similar to Chiuri’s strong start at Dior, Piccioli has succeeded in stamping his own identity into such a storied brand. One can expect upcoming collections to be less pretty-pretty, a little more grounded. And it looks like he’s starting with the shoes.

Balenciaga Heralds the Return of the Square Toe for Spring 2017