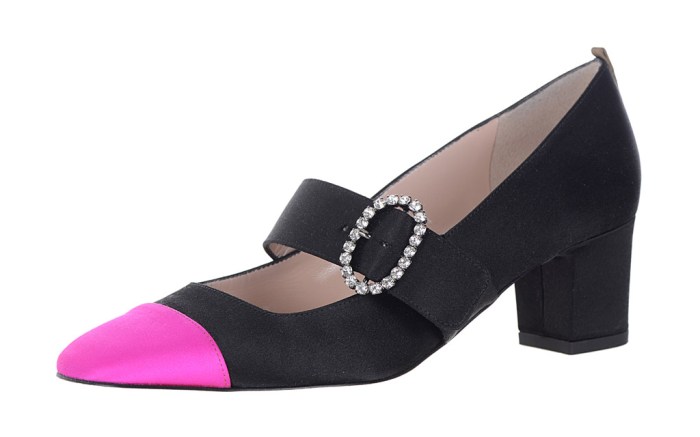 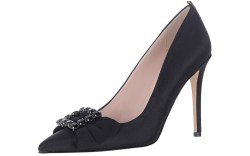 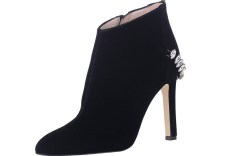 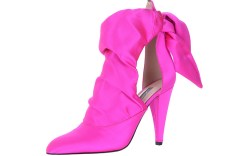 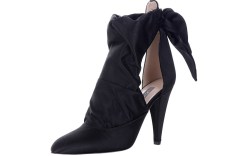 Sarah Jessica Parker may be starring in the new television series “Divorce”‘ but her love-in with shoes is certainly on solid ground.

For her fall ’16 SJP collection, the actress-turned-footwear mogul combined many of her go-to touches in lively new ways.

Grosgrain ribbon, a brand signature that trims each a every style in one way or another, was bow-tied onto 80mm Witness pumps and finished with a crystal pilgrim buckle. Yes, like many silhouettes in the collection, it was undeniably Manolo-esque (Parker’s business partner is Blahnik’s North American sales director George Malkemus, after all), but knowing the reverence both have for him, SJP’s styles are more wallet-friendly homage than clear copy. The similar Fawn pump was rolled out in a variety of plush velvets, an all-important trend this season, too.

On the more experimental side, Parker played with draping on the cutout Baton bootie with conical heel, done in shocking pink satin. Ditto the Echo bootie, which calls to mind the Charles Jourdan late-’70s era Parker has said inspired her initial collection. It helps that she’s been wearing them on the red carpet of late.

Parker’s background in the theater and dance comes through in her love of classic stage shapes, such as the Sashay ballerina and best-selling Tartt low-block heel. The latter character-shoe style sparkly version also became a hit on Zappos Couture and NeimenMarcus.com when Parker wore them last year and was smartly updated as a cap-toe Mary Jane pump called the Soeur, the most standout style from the collection. The pointed toe Katrina version was also particularity fetching and showed the brand’s focus on modest heel heights.

It’s not easy to translate that Carrie Bradshaw-esque stiletto spirit to more grounded, gamine styles, but SJP is taking it all in stride. We are expecting her to bring out the big-gun heels for her upcoming MET Ball appearance next month.