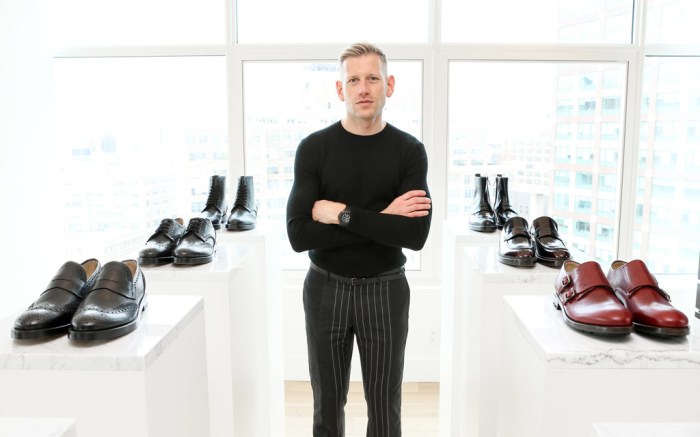 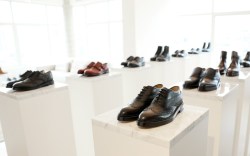 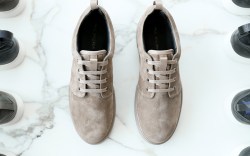 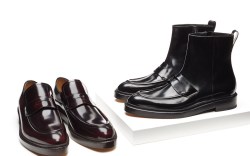 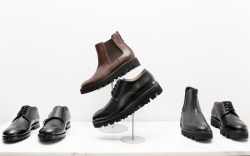 You won’t find Paul Andrew entering the men’s market with guns blazing. “I’m not interested in fashion-victim shoes,” he said at his New York Fashion Week: Men’s presentation. Instead, the designer officially launched a sleek and edited men’s collection for fall ’16, which Footwear News previously reported on in January.

In times of extreme experimentation on the men’s runways, Andrew indeed may be on to something with that statement. The recent men’s shows offered daring styles like glitter sneakers and floral fur-lined loafers — fun shoes, but unlikely to perform on the sales floor. Here, the designer forwent boldness and unveiled a strong lineup of wearable styles that were just distinctive enough.

“I was looking at a lot of men’s ready-to-wear trends, and I couldn’t find a shoe to go with the looks that I was putting together,” said Andrew, who designed men’s shoes for Alexander McQueen and Calvin Klein before launching his own label. “It’s a lot of traditional men’s shapes that I’ve twisted and reworked to make them more modern. They’re not extremely classic, but not avant-garde either.”

The collection — priced from $595 to $1,295 and made in Milan — is made up of three different messages.  There are the formal shoes, of course, which one expects from Andrew. There were lizard smoking slippers and velvet laceups with a thick wooden sole. The second grouping included dressy styles like a black oxford with lug sole, or a tri-layered wingtip brogue with laser-cutting.

And then there were the minimal sneakers. The offering ranged from suede low-tops to buffalo-leather high-tops. “I’m not going to put bells and whistles and studs and eyelets,” Andrew said. “They’re always going to be more streamlined.”

The through line in the collection included a focus on new, technical craftsmanship. Burnished effects were created using tamponato leather, where it is buffed with black polish to reveal color underneath. Andrew also developed a less-clunky lug sole that is injected with rubber and air for a lightweight effect.

Andrew is currently showing the collection to retailers and working on prepping his fall women’s collection. “I’m trying to keep it very tight right now,” he said. “We haven’t confirmed anyone yet, but we’re working on a few exclusives.”

For more styles from the collection, click through the gallery.

To read more of FN’s men’s coverage, read on below: