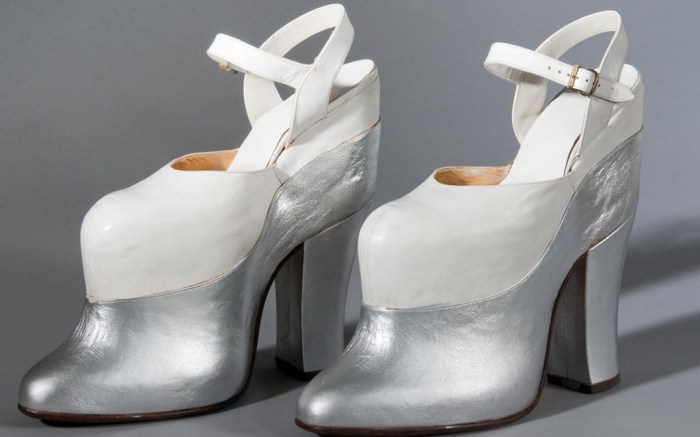 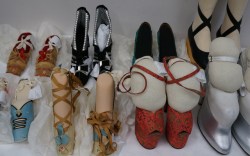 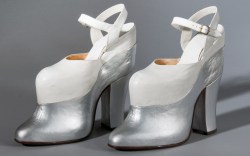 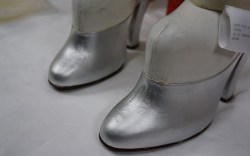 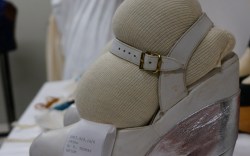 Why don’t you come up and see Mae West’s heels sometime?

The shoes responsible for the Depression Era starlet’s trademark glide are among a haul of famous and historic footwear that have been exhibited by the Fashion Institute of Design & Merchandising museum in Los Angeles.

In forthcoming programs, the FIDM museum will showcase current showbiz shoes in its 10th annual “Outstanding Art of Television Design Costume” exhibition and rare footwear in its “ManMode: Dressing the Male Ego” exhibition. Both open on Aug. 2.

Curator Kevin Jones opened up FIDM’s vaults ahead of the presentations and gave Footwear News a preview of some of the men’s shoes that will be displayed, as well as a look at the museum’s most prized shoes worn by Hollywood stars.

Perhaps one of the most striking in the collection is that of West, one of Hollywood’s earliest sex symbols of the big screen and stage.

The singer-actress was as extreme with her footwear fashion as she was with her double entendres. At 5 feet tall, the curvy bombshell wore customized Pepenie heels to boost her to towering statuesque heights, creating a va-va-voom silhouette.

To achieve the effect, she donned what FIDM refers to as the “Double Deckers.”

“Because the gown would come down and you would see down to her toe,” Jones explained.

The curiously crafted shoe-within-a-shoe is designed in silvered leather with a white platform built on top of the insole and an ankle strap to keep West steady. Together, the heel and platform measure 9.5 inches. The hemline of the wearer’s dress must be designed at such a length that it covers the upper portion of the shoe, lest the illusion be discovered.

“I have never in my life have seen another pair of shoes like this,” Jones remarked. “She may have developed this with a cobbler, and she likely worked with a dressmaker because it had to cover the hemlines.”

Jones said a colleague spotted West wearing the footwear in one of her films, “getting in or out of a carriage. She only ever wore this kind of shoes when she was seen. They were all custom, made here in L.A.”

Jones added that the weight of the footwear is quite heavy and is the reason for her famous sashay. “This is why she created that walk — she would glide without lifting her feet up.”

In total, FIDM has eight pairs of West’s shoes and six sets of her bespoke Jule Park undergarments — a gift from Kevin Thomas, who was bequeathed the property from Dolly Dempsey, West’s former fan club president.

“Asian motifs were popular, especially in the ‘30s,” Jones explained. “Platform shoes started in the late 1920s, but in the ‘30s was when it got started and became really fashionable going into World War I.”

By contrast, Marlene Dietrich, also a major star of West’s heyday, was a style icon with an adversely different approach to fashion — refined and androgynous.

FIDM has the largest Dietrich collection in the United States, and among the garments the museum has 19 pairs of her bespoke shoes, including a pair of patent leather tuxedo pumps — then taboo for a women to wear at the time — and bold red heels.

“This is highly unusual,” Jones said of Dietrich’s tuxedo shoes. “They were very few women who would dress like that. They were either outside of fashion because they were performance people — Greenwich village artists or Bauhaus German women who really were in that artist milieu, and somebody like Dietrich who was pushing gender boundaries. These were probably stage shoes when she was in her tuxedos. These were made like a man’s shoe.”

Another fan of the tuxedo shoe was Fred Astaire, whose 1930s custom-made evening pumps, correspondent shoes and brown day tap shoes are a part of FIDM’s collections.

“It’s hard to tell on-screen one brown pair from the other,” Jones said of the shoes, which he believes were used in one of Astaire’s films.

“These were probably worn in walking scenes. The problem is that he wore the same type of shoe — and made replicas of shoes that he liked the most.”

Boasting a rare collection from the 1800s and later, the museum has rare men’s and women’s shoes, representing the evolution in footwear from neoclassical style influences to the formation of the modern pin high heel.

“These were people who were really pushing fashion forward — cutting edge fashion of the time period,” Jones explained of the footwear from their respective eras.

Among the gems, a pair of First Empire sandal slippers from Britain or France, possibly from 1800 or 1805.

“These are called ‘straights’ because you could flip them around the feet. It wasn’t just a left shoe or right,” he said. “It was more cost effective if you had one set of patterns and just replicated over and over. Shoes were not sized and clothing was not sized. Small, medium or large did not exist. Everything was made for somebody.”

The pink and blue dyed leather shoes feature open slits at the toe and on the sides — a highly unusual style at the time because of the novelty it created, Jones added. “If you had colored stockings on, you could see the different colors every time you put your shoe on.”

Jones said the shoes fit “almost like gloves” in the 19th century, when the styles were designed to create an illusion of a much smaller foot, as the sole was aligned underneath the foot. “You can see she was walking on part of the sides of her shoes,” he explained of the worn sides. “Her foot was not this tiny.”

From the 1830s, the museum has a pair of classic ballerina fashion shoes with a square toe cap, featuring an exterior made of straw and horsehair that was boiled to release color, and an interior lined with crimson silk. “This is straw work, probably Italian straw work sent to England to then be made into shoes,” Jones said. “The bonnet industry and footwear industry worked in collaboration — the same sources, the same techniques and the same treatments, but this is very unusual in a slipper.”

A pair of hand-embroidered French couture shoes highlights the resurgence of heels in the late 1870s — favoring the style from a century earlier. The shoes are decorated with bows at the back of the heel and front, a response to new fashion statements at the time.

“The skirts had raised up a bit,” Jones explained, “So you could’ve seen the decoration if she was walking along. Suddenly the 18th-century revivalism becomes popular — the whole cult of Marie Antoinette. They are starting to look at illustrations, painting and surviving shoes but re-creating them in a modern silhouette.”

By the end of the century, Jones noted, the squared-toe shoe style wanes and begins to become rounded, eventually elongating to a point by the 1890s.

“These are luxury items,” he said. “A woman would wear them three or four times and then buy some more.”

Wooden heels were replaced by the advent of the steel heel, which supported the weight of the wearer and allowed for a pin-thin silhouette.

In 1959, Roger Vivier — who designed shoes for Christian Dior before establishing his own label — crafted what has become the modern high heel.

“He is the one who invented this mid-century ultra-feminine French couture look,” Jones said. FIDM has a pair of pumps covered in Kingfisher feathers, a tropical bird species that is nearly extinct. Illegal to produce nowadays, Jones said the only other pair of Vivier’s Kingfisher feather heels belongs to the Metropolitan Museum of Art.

“This is known as the shock heel — which means it looks like it could collapse at any minute,” he said of the curved design. “He’s the one who championed the use of steel in shoe heels and the shanks, which gave them support so that you could have tiny pin heels. The steel pin became another technological development that allowed the shoe to morph.”

The style was a hit, but not without its critics.

“Women were not allowed to walk on certain floors because they were punching holes in the parquet floors,” Jones said. “They would destroy the floors by jabbing metal spikes into the wood. These became controversial because of that.”

Of course, not all shoes were made for walking.

In 1915, a member of the Stetson family produced the “Gecko” shoes, which were so extreme that they were likely only for exhibition. “These are the most extravagant shoes I’ve seen in my life for men,” Jones said. “These were made by Stetson — as in Stetson hats, but the cousin, so not the hat maker, but his cousin did shoes.”

The footwear features intricate design patterns with detailed leather stitching, including a gecko applique with beaded eyes, and hand-stitched and cross-stitched leather.

“To make these you had to be very strong — this is leather threaded through leather,” Jones said. “We would stamp this today to look like leather woven into leather. It would be difficult to wear these and they have substantial weight. There could be two or three other pair in the world and that’s it.”

Click through the gallery below to see more photos of FIDM’s historical and Hollywood footwear.