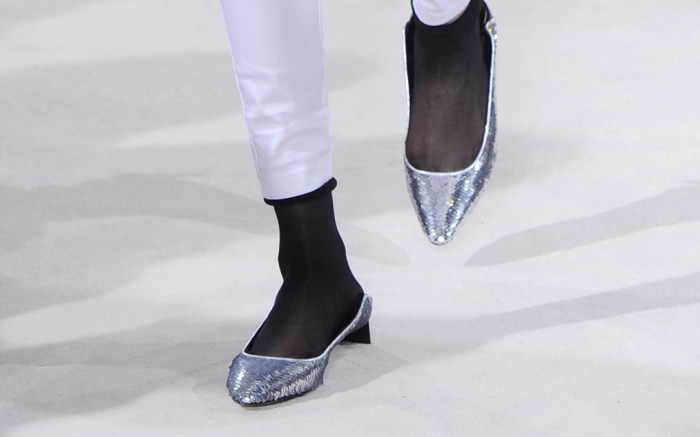 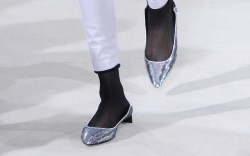 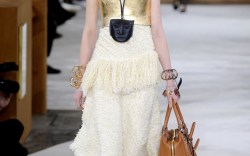 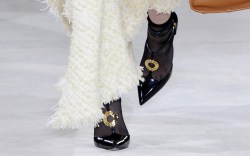 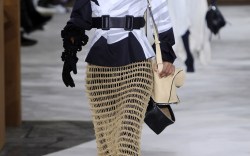 The Mood: An ode to the house’s roots in Spain. Creative director Jonathan Anderson reworked Spanish silhouettes and brought his signature futuristic flair — think dresses or skirts with tango-style layering, paired with gold-plated bodices worn overtop. Flamenco fringing was added onto hems. Puffed sleeve dresses in a crisp white, cinched at the waist with fabric, were reminiscent of the traditional wear worn by Spanish dancers.

The Shoes: While the clothing indeed had a nostalgic feel, the shoes were very much in the now. Anderson showed patent pointy t-strap pumps that had a golden circular detail on the front. They were paired with sheer ankle sockets. Sequin mules — a much-needed lightness against the heavier texture of the clothes — had a slight kitten heel that jutted out on an angle. The same style was done in an embossed leather.

The Review: Anderson has once again shown that a storied fashion house can be both reinvented and respected at the same time. With a number of major labels needing new creative directors — Lanvin, Christian Dior — the new power players need to step up to the plate and, frankly, shake things up. It’s working for Loewe.