Dorateymur Looks To Marie Antoinette & The New Romantics For Fall ’16 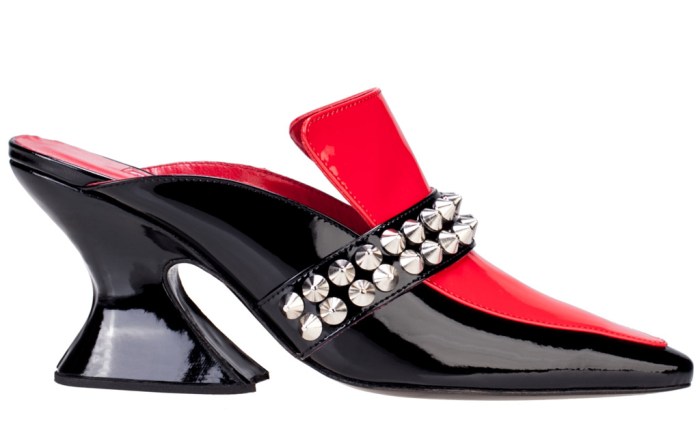 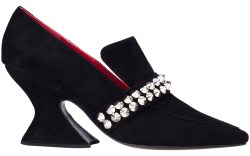 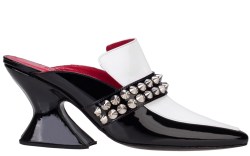 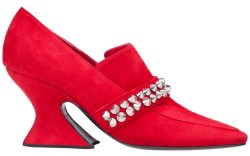 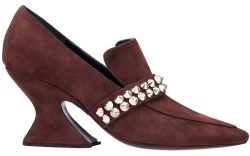 For fall ’16, shape-shifting shoe designer Dora Teymur embraced some unabashedly bold silhouettes with a nod to the past. The buzzy London-based high-contemporary designer, just 25, first broke out a few seasons back for his distinctly fresh take on loafers with extreme squared-off toes and coolly retro color combos.

“I’m drawn to geometric shapes,” says Teymur, a graduate of Cordwainers School at the London College of Fashion, on his successful Munise and Turbojet styles. It was enough to garner attention and orders from bellwether retailers such as Browns, Netaporter.com and Opening Ceremony.

His latest collection breaks from its primarily block-heel focus, exploring exaggerated versions of classical period flared heels on cropped booties, loafer pumps and buckled mules. Channeling the rebellious spirit of a modern-day Mozart or Marie Antoinette, the styles come wrapped in a band of combative conical studs. Historical references could also be found in his gothic medieval slipper styles.

“If people thought my previous work was unexpected, with this collection they will be shocked,” declares Teymur. “I’m doing something very new.” Indeed, classical shapes were fused with references the designer pulled from The New Romantics in a slick palette of silver, black, red and wine. “I’m influenced by the ’80s right now. I think rock ‘n’ roll will always be prevalent in my work in a way.”