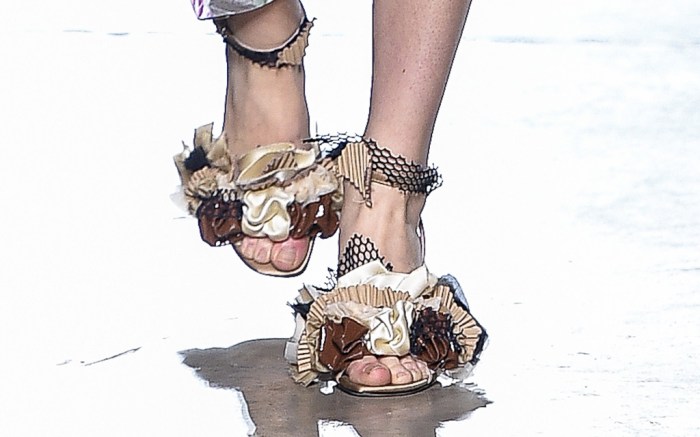 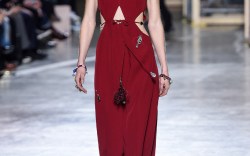 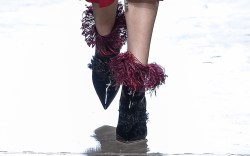 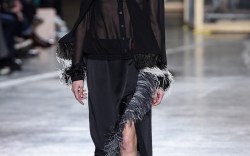 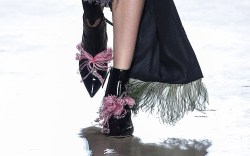 The mood: Shown at London’s Tate Modern, Christopher Kane’s latest collection took cues from the idea of hoarding, as well as “outsiders” and “recluses.” The result was an eccentric mix of models wearing plastic bonnets — designed by Stephen Jones, no less — and looks plastered with fringe and flower embellishments. The best kind of weird.

The shoes: A more-is-more approach prevailed in the shoes. Pointy patent boots had long feathered trim at the ankle, or as a tassel on the vamp. Ankle-strap sandals were done in a fishnet fabric with scrunched ribbon forming a floral appliqué. When taking Kane’s fictional recluse character into account, the crafty footwear — as though she had toyed away making them herself — provided much-needed comic relief.

The review: Similar to his London counterparts like J.W. Anderson, Kane consistently keeps to his offbeat message by offering a strong shoe assortment. It sounds strange, but not all collections can be wearable for the everyday. Where’s the fun in that?

For more Christopher Kane looks, click through the gallery.

To see more of FN’s fall fashion coverage, read on below: