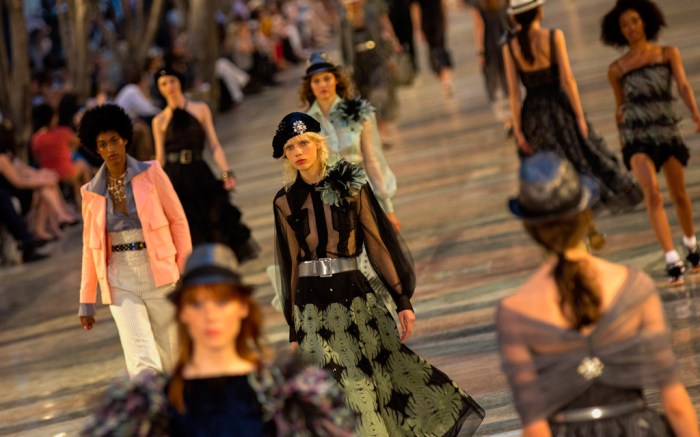 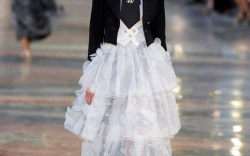 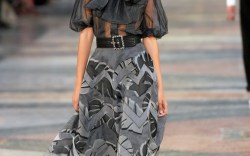 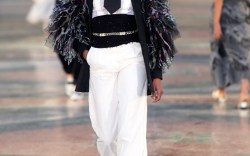 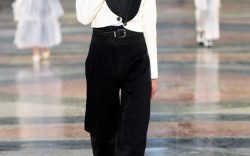 Here’s a little-known fact about Karl Lagerfeld: He’s a massive fan of Latin music, which he reckons is in the throes of a comeback.

“Mambo No. 5” by Xavier Cugat, who popularized the genre in America in the Forties and Fifties, is a particular favorite.

Probably even lesser known is the fact that Lagerfeld was once a cha-cha and tango champion. The German designer took lessons in his early days in Paris at the Georges & Rosy dance academy on the Rue de Varenne, and he would practice in nightclubs.

“I won contests,” Lagerfeld said Monday as he put the finishing touches on Chanel’s cruise collection, which he dubbed “Coco Cuba” and paraded Tuesday night on El Paseo del Prado, a handsome tree-lined boulevard framed by four statues of lions, a symbol of Chanel.

The audience took in the open-air show seated on park benches as the Latin beats ricocheted off the handsome buildings, capturing the essence of lively, steamy Havana, where music leaks from open windows at night and dancing can spontaneously erupt on sidewalks.

The collection riffed lightly on Cuban-isms: The neat vertical pleats of guayaberas — typical men’s shirts — were incorporated into Chanel jackets; beach-y colors and slogans were splashed across nubby tweeds and souvenir T-shirts, and the vivid paint jobs on bulbous Fifties cars were echoed on sequined dresses. One of the latter, in teal, hugged the curves of Lindsey Wixson — a wiz at sashaying down a runway — like a fender does a tire on a vintage Chevy.

Never mind that house founder Gabrielle Chanel never stepped foot in the Caribbean country — “Perhaps she smoked cigars,” Lagerfeld teased — or that he hadn’t either until Sunday night, when he toured Havana, taking in its decaying colonial buildings, sunbaked colors and clandestine retro taxis. Lagerfeld found it all “beautiful in a way, even if it’s a little neglected — the colors, the cars, there’s something very touching about it. Cuba is like nothing else in the world,” he said. “It has an identity I love, and I always wanted to go, but I need a professional reason.”

Lagerfeld said he hit upon the idea to do a show in Cuba long before visits by Pope Francis, President Obama and The Rolling Stones — all potent symbols of an isolated, stagnating nation slowly opening up to the world.

“It was like a private joke because I thought it was impossible,” the designer said. “Suddenly, Cuba is the most talked-about thing in the world, and we’re the first with fashion.”

To be sure, Lagerfeld and Chanel touched down in Havana as the country sits on the cusp of sweeping changes. In one of those strange coincidences that happen frequently with Lagerfeld, a Carnival cruise ship laden with 700 passengers from Miami docked on Monday – the first in decades and a symbol of how rapidly the barriers between communist Cuba and capitalist America are crumbling.

Chanel, too, imported some 700 people for the show, treating editors, clients and VIPs to lavish dinners, a “Cuba Revolution” tour, cigar factory visits and a night at the Tropicana, the famous cabaret where lithe dancers shake their ruffles like there’s no tomorrow.

Locals crowded on balconies and on rooftops overlooking the boulevard, and they shrieked upon the arrival of Vin Diesel, who was in town shooting the eighth installment of “Fast & Furious” – practically a slogan for the changes gripping Cuba. The actor arrived in a red and white Mercury named Lola, dressed in a white guayabera, and marveled at history unfolding on the island nation. “We had the first American military aircraft flying here since 60 years,” he said. “And a Chanel show in Havana. It’s never happened before.”

Diesel said he was first in Cuba 17 years ago, and confessed, “I love it so much it’s scary.”

Lagerfeld’s affection was also plain on the runway. Forgetting a few feathery mambo sleeves that had a whiff of Tropicana, he etched the Latin theme lightly and blended it with Parisian chic. There was a host of long and frothy dresses with full skirts, gleaming cha-cha numbers, a surfeit of great knits and lots of crafty touches, including fringing and loose, macramé weaves.

“The collection is an idea of a chic and modern Cuba,” he said. “It’s easy pieces.”

Stella Tennant, in a mannish jacket with pinstriped white pants and a sparkly cummerbund, was the first to tread the long and wide public space. The tailoring yielded to vaguely Fifties silhouettes with pinched waists and fanning skirts – the dominant silhouette. Then the looks came in the manner of Diesel’s film, from vaguely military shirt jackets with silvery embroideries to candy-striped pants and sultry, multi-color lace skirts.

Accessories included jaunty straw Panamas and sparkly black berets, which could be seen as a wink to the French capital — or Che Guevara, a major figure of the Cuban Revolution in the Fifties.

Celebrity guests, many of them stepping foot in Cuba for the first time, were dazzled by the place.

“I’m in awe, of the colors, the buildings, the music, the smiles — people are so nice. It’s just magnificent,” said Vanessa Paradis, who is gearing up for her stint as a juror at the Cannes Film Festival later this month.

Tilda Swinton, filming Joon-ha Bong’s “Okja” opposite Jake Gyllenhaal, was mum on its plotline, but said filming would move from Korea to New York and wind up in Vancouver. Currently on screens in “A Bigger Splash,” the Scottish actress is slated to reunite again with director Luca Guadagnino on “Suspiria,” a thriller set in a ballet school.

Costumes are typically key to their collaboration, “but we don’t know quite yet,” she said, cooling herself with a canary yellow fan. “It’s set in the Seventies.”

Chanel’s show climaxed with a drum corps that got the models dancing and Swinton shaking her hips, sweat dotting her pristine white shirt.

Bruno Pavlovsky, president of Chanel fashion, said the house only obtained the green light from Cuban authorities to stage the show in March, but had contingency plans to mount a Cuban-style event in Paris — as it has done for past Métiers d’Art collections that referenced Russia, India and Turkey.

The event winked to the Twenties and Thirties, when Cuba first emerged as a popular cruise destination in the Caribbean. And as with Chanel’s other itinerant fashion shows, the exotic locale and narrative anoints the collection with a collectability factor that ignites desire among loyal clients.

“They love to have these kind of strong, identifiable pieces — something you keep forever. It’s more than just clothes,” Pavlovsky said. “The money we invest in the show generates content for the rest of the year. It’s the showcase, the story around it.”

Chanel invited about 100 top customers, mainly from the U.S. and South and Central America, to witness the spectacle, along with tours and a visit to La Factoria, which is hosting an exhibition of Lagerfeld photos as part of a monthlong program of French culture in Cuba.

Pavlovsky said he’s confident he can achieve double-digit growth for the cruise collection despite a challenging economic backdrop. Trouble spots for all luxury players include Paris, Brussels and Istanbul – reeling from terrorist attacks and diminished tourism – along with Russia, Brazil and Hong Kong.

While Chanel logged a single-digit sales increase in 2015, Pavlovsky is targeting “more or less flat growth in 2016 compared to the year before. We have to be cautious.”

Chanel has zero business in Cuba, but is charting growth across Latin America, Pavlovsky said. The house operates three stores in Brazil; it added a boutique in Panama last July and a second location in Mexico City last year.

The executive stressed that showing in Havana was purely a creative impulse by Lagerfeld, with no political message. He and the designer acknowledged that the event could raise the profile of Cuba and advance its progress.

To be sure, Chanel brought a bevy of wealthy guests and influential editors, also hiring local models, chauffeurs, caterers and event planners. A party in one of Old Havan’s most picturesque squares, the Plaza de la Cathedral, followed Tuesday night’s show.

Wixson, for one, could not have been more grateful, approaching Lagerfeld for a fitting with her hands in the prayer position.

“Thank you, Karl, for bringing us to Cuba,” she said.

The indefatigable Lagerfeld is already zeroing in on a location for Chanel’s next Métiers d’Art show in December, hinting that it would take place in Europe. But first is a campaign shoot for Coco Cuba, with the designer mulling as a location La Pausa, a vacation home the founder built in the Thirties in Roquebrune-Cap-Martin, France. It was recently acquired by Chanel.

Click through the gallery to see the Chanel cruise ’17 collection.