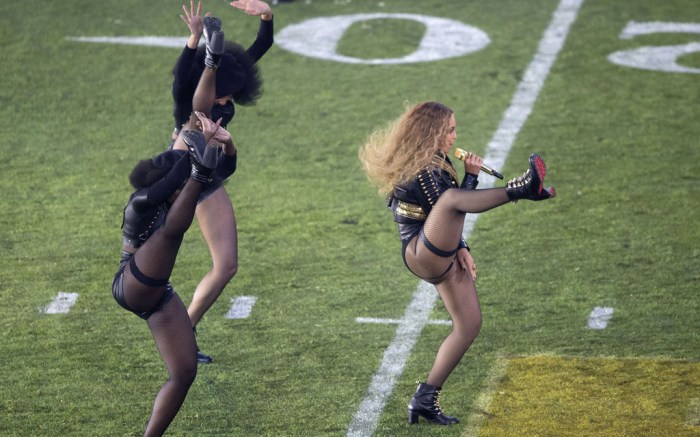 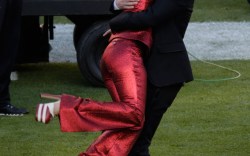 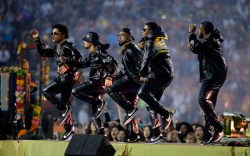 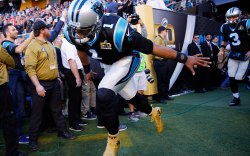 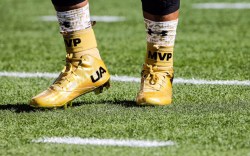 When it comes to footwear, Super Bowl 50 did not disappoint. Carolina Panthers quarterback Cam Newton kicked things off with his gold Under Armour limited edition C1N gold MVP cleats. Newton warmed up in the cleats but then changed into a black pair for the game.

While Newton’s Panthers were highly favored, it was the Broncos who came out on top, led by Peyton Manning and Super Bowl MVP Von Miller. Miller wore white Adidas cleats, while Manning wore Nike.

Sure, the players’ cleats are cool, but nothing compared to the footwear we saw on stage. Lady Gaga stunned in a custom Gucci suit by the house’s designer Alessandro Michele to sing the National Anthem. She wore patriotic glitter platform shoes—one in blue and one in red and white.

For the halftime show, Coldplay’s Chris Martin came out wearing his signature Air Jordan Spizike sneakers—so colorful they couldn’t be missed. Martin stuck to his usual uniform, but his co-performers Beyoncé and Bruno Mars both aimed to channel legendary musical acts.

Beyoncé stole the show in a Dsqaured2 outfit that took inspiration from Michael Jackson’s 1993 Super Bowl halftime performance. Christian Louboutin provided booties for the singer, who stormed the field with some impressive dance moves and debuted her new single “Formation.” Her dancers wore similar lug-sole booties by Dr. Martens. In the music video for “Formation,” which dropped on Saturday, Beyoncé wore a range of outfits including one by Gucci.

Click through the gallery to see more of the best Super Bowl shoe moments.