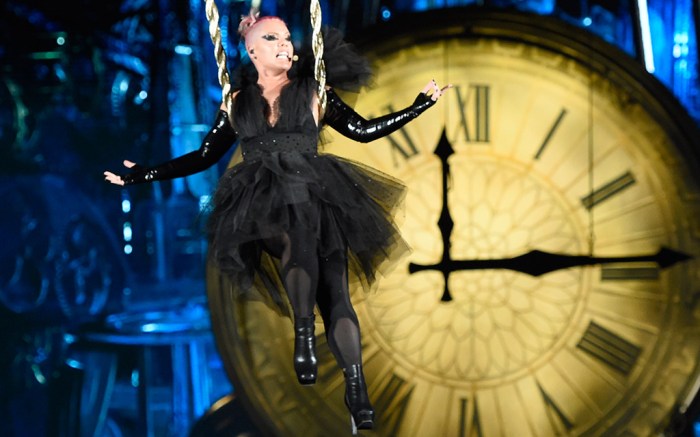 Pink took her Billboard Music Awards 2016 performance to new heights on Sunday night, singing her single from the “Alice Through the Looking Glass” soundtrack called “Just Like Fire.” During the performance, Pink soared through the air, giving us a clear view of her sky-high platform booties.

Pink ended the performance sitting on top of a fiery clock high above the stage, which again showed off her leather platform booties paired with a black tulle ensemble.

Since the song’s release, it has already reached No. 8 on the Billboard Adult Top 40 chart, and it’s peaked at No. 30 on the Billboard Hot 100. The single marks her first Hot 100 appearance since 2013.

Pink is no stranger to the Billboard Music Awards. She won Best New Pop Artist in 2000, Top Female Billboard 200 Album Artist and Top Hot Top 40 Artist in 2002 and Woman of the Year in 2013.

Other top performances of the night came from Rihanna, Kesha, Justin Bieber and Demi Lovato.

For all the best celebrity looks from the red carpet, click through the gallery below.