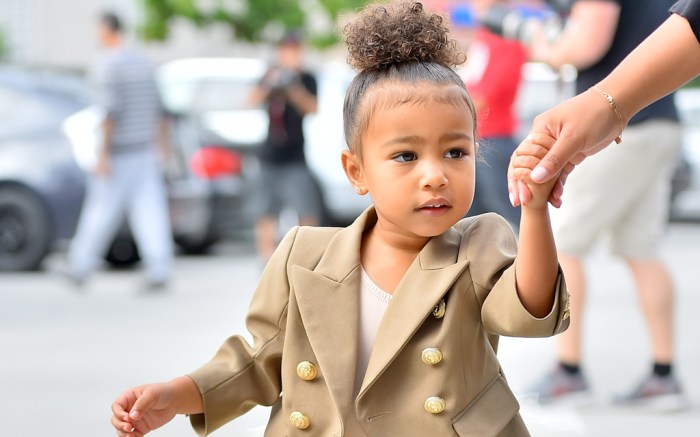 Earlier this year, Kim Kardashian West shared a photo of daughter North dressed up in a Cinderella dress playing with her toys in her messy closet. She captioned the photo “It’s gonna be a long night…” While Kardashian West was busy picking up after North, we couldn’t help but notice the shoes on the shelf.

North’s collection of Vans and Yeezy Boost 350s that dad Kanye made especially for her were on display. Since then, we’ve gotten a look at plenty more mommy-daughter moments thanks to Kardashian West’s Snapchat.

It's gonna be a long night…

Aside from her growing sneaker collection, three-year-old North also has classics such as Dr. Martens boots in several colors, Converse Chuck Taylor All Stars, Vans sneakers and Adidas Stan Smiths. She’s often spotted in ballet slippers when she goes to her weekly class with cousin Penelope.

We also learned that North loves her Ipanema brand flip-flops, which she even occasionally wears for nap time.

North and her parents welcomed a new addition to the family in December, and we know it’s only a matter of time until baby Saint will have his own collection of Yeezys just like his sister.

Click through the gallery to see more of North West’s adorable shoe moments.

Kanye West Steps Out In Unreleased Yeezys With Daughter North