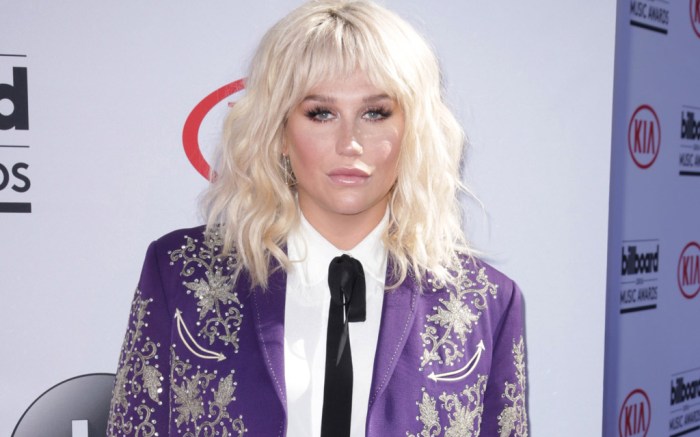 Kesha made her return to the stage tonight in a big way at the Billboard Music Awards. The singer stepped out at the Las Vegas event to perform a tribute to one of her idols, Bob Dylan.

On Instagram, Kesha shared a few shots of her outfit, which she called a vintage “museum piece” and pair of Gucci shoes. The singer said the purple bohemian suit was part of her homage to Dylan and Prince.

It’s been a bit of a roller coaster for Kesha and her fans this past week.

After getting permission to perform at the awards show, the singer shared on social media she was being removed from the program because her management team was reportedly concerned about a possible protest performance. Kesha has been locked in a high-profile case against producer Dr. Luke, whom Kesha has accused of sexual assault. She has been trying to break her contract with the producer.

After protest by fans, Kesha was allowed to take the stage at the BBMAs to sing Dylan’s classic “It Ain’t Me Babe” with accompaniment by her friend and musician Ben Folds. It was a major moment for the singer, who performed in a white suit and shimmering heels, and she received a well-deserved standing ovation from the audience.

What did you think of Kesha’s performance tonight and red-carpet tribute to two music icons?

For more red carpet shoes of the Billboard Music Awards click through the gallery below.