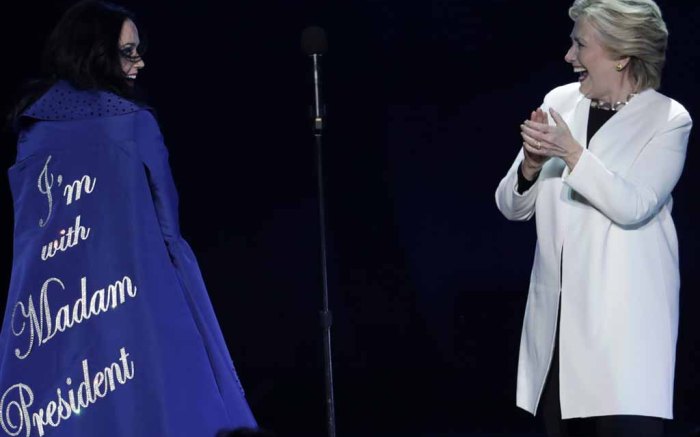 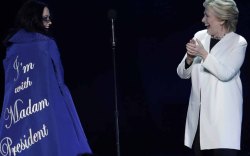 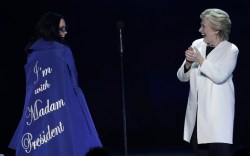 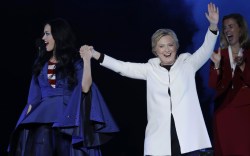 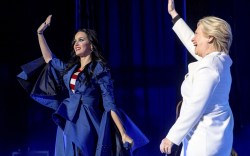 Katy Perry’s support is clear: “I’m With Madam President.” The singer had her endorsement emblazoned in rhinestones across her blue Prabal Gurung cape today when she entertained a crowd in Philadelphia at the Get Out the Vote concert.

Her look was a collaborative effort that included her stylist Karla Welch and Gurung — both Clinton supporters.

Perry’s cobalt cape featured flounced slit sleeves and the hand-embroidered message. She teamed it with matching trousers and a star-spangled sequins top.

Gurung’s sketch included a pair of towering platform shoes, but the pop star opted to go barefoot. The designer captioned the illustration with a message on supporting a candidate who is passionate about women’s rights. “We are all passionate, adamant activists for Hillary and for feminism worldwide,” Gurung wrote. “Here in the United States, we may take for granted what it means to have a woman in power, but it sends a worldwide message and has an especially strong impact on countries where women’s rights are compromised. Karla, Katy and I wanted to celebrate this revolutionary moment with Hillary.”

A post shared by GabrielStopMotion Films (@gabrielstopmotion_films) on Nov 5, 2016 at 8:32pm PDT

Clinton was also feted by “Will and Grace” actress Debra Messing as well as Shonda Rhimes, the powerhouse producer behind “Scandal,” “Grey’s Anatomy” and “How to Get Away With Murder.”

“I want to thank [Rhimes] for writing powerful women characters,” the Democratic presidential nominee told the crowd after she was introduced by the showrunner.

“There are only three days left in this most consequential election,” she continued. “More than 37.5 million people in our country have already voted. Why? I believe they are standing up for a hopeful, inclusive vision of America. I’m asking you to come out and vote for that same vision.”

#Repost @prabalgurung ・・・ "We are all passionate, adamant activists for Hillary and for feminism worldwide. Here in the United States, we may take for granted what it means to have a woman in power, but it sends a worldwide message and has an especially strong impact on countries where women's rights are compromised. Karla, Katy and I wanted to celebrate this revolutionary moment with Hillary." Thank you @voguemagazine for sharing the story of our collaboration with the visionaries that are @karlawelchstylist, @katyperry and @hillaryclinton. Go to the link in our bio to read the full story. #pgworld #pgmuse #imwithher #imwithmadampresident #femininitywithabite #hillaryclinton #katyperry #vogue #election2016

While Clinton was at the Philadelphia concert, her GOP rival Donald Trump had an unfortunate disruption at his rally. The mogul was forced to cut short his campaign speech in Reno, Nev., after Secret Service rushed him off the stage. According CNBC, chaos ensued when a protester attempted to approach him at the stadium and someone shouted “gun.”

Taking to Twitter, he told his supporters that he remains undaunted. “NOTHING will stop us in our quest to MAKE AMERICA SAFE AND GREAT AGAIN!” he tweeted.

Clinton is in a heated presidential race against Republican nominee Trump. The candidates will face off for the top spot in the White House on Tuesday, Election Day.

Click through the gallery below to see more photos from the concert.