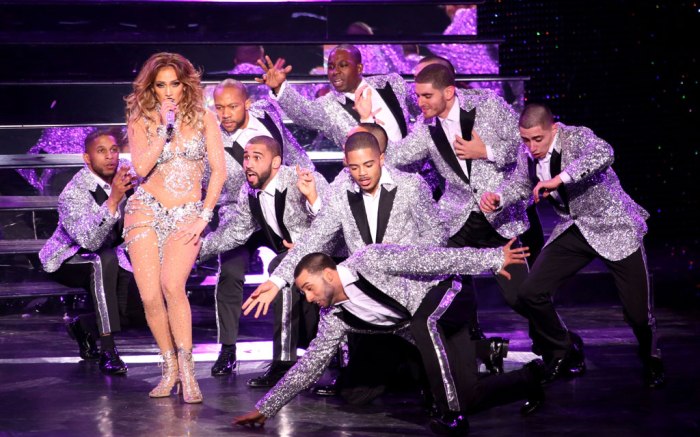 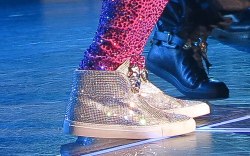 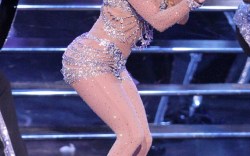 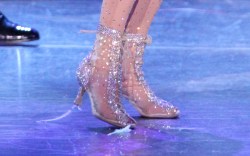 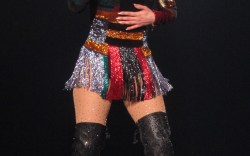 Twenty-five years ago, Jennifer Lopez burst onto the scene as a Fly Girl — a dancer on the television show “In Living Color.” More than two decades later, the superstar has added quite a few lines to her résumé: chart-topping songstress, movie star, powerhouse producer, “American Idol” judge and prime-time series regular.

At 46, Lopez could easily call it quits with everything she’s already accomplished. Instead, she has just taken on another huge role — on the Las Vegas stage.

Her show, “Jennifer Lopez: All I Have,” kicked off on Jan. 20. Lopez joins an exclusive club of Sin City headliners, including Celine Dion, Bette Midler, Cher, Elton John, Britney Spears and Mariah Carey.

Lopez is settling into her 20-date residency at the Axis Theater inside Planet Hollywood Resort & Casino. This will be the only opportunity to see her perform live in North America.

“All I Have” has garnered glowing reviews, and part of its success has to do with Lopez’s headline-making costume changes. The show is close to two hours long and features a five-piece band and 16 dancers. It also “stars” Zuhair Murad, Versace, Michael Costello and Nicolas Jebran — the designers of the custom costumes.

And there are plenty of dazzling shoe moments, from Christian Louboutin to Jimmy Choo.

As she did for her 2012 world tour, “Dance Again,” Lopez tapped costumers and stylists Rob Zangardi and Mariel Haenn — who have also styled Rihanna, Gwen Stefani and Rachel McAdams — for her Vegas act. According to the duo, Lopez was deeply involved in crafting the looks she wears.

“Jennifer is always hands-on with the design for her show costumes,” said Zangardi. “The process began with a shared folder of references we all contributed to. Once there were a substantial number of those, we started putting them together in groups for each section. Once those were narrowed down to a vibe and a direction, we sent them to the designers and collaborated on our interpretation.”

Haenn said the show delivers a variety of music and fashion flavors. “Jennifer’s shows feature all of the things that inspire her music, so there’s always an element of Old Hollywood glamour, hip hop from the “Jenny from the Block” days, a Latin section, a ballad and an electronic-dance-music section — each of which has its own distinct look.”

All of the costumes were custom-made, and for the opening number — her first Billboard Hot 100 No. 1 hit, “If You Had My Love” — Lopez exudes glamour in a Versace-belted Swarovski crystal jacket adorned with white feathers. The jacket is paired with a Zuhair Murad crystal-covered bikini and custom-made dance shoes. The over-the-top look sets the tone for a true Las Vegas show experience, including a total of 260,000 Swarovski crystals on her Versace designs.

“Stage always allows for a more extravagant and sexy look that wouldn’t be seen anywhere else,” Haenn said.

Bronx-born Lopez had to pay homage to her hometown neighborhood. She represents New York in a bedazzled pink fitted Yankees hat that is paired with a Versace athleisure-like ensemble, with the word “Bronx” encrusted on the sweatpants. And a replica of an NYC subway train is part of the stage set.

This section of the show delivers the best shoe moment of the spectacle — a pair of Versace Palazzo sneakers — which came from Lopez’s personal collection. In fact, the sneakers were a gift from Donatella Versace, said Haenn, and they just so happened to work for the show. During this portion of the night, Lopez sings fan favorites like “I’m Real,” “Feelin’ So Good” and “Jenny From the Block.”

As the ultimate performer, Lopez puts much of the show’s focus on dancing. Since being able to move freely is key, heel height becomes a factor.

“Comfort and functionality are important, especially with the footwear,” said Zangardi. “Jen is a dancer. Therefore, her footwear has to allow her to perform every movement. The heels vary per section. If she’s dancing, it’s a two-and-a-half-inch heel on a dance shoe. For the ballads, she can wear a five-inch [Jimmy Choo] stiletto since she isn’t dancing.”

Another statement shoe, out of the seven shoe changes she makes during the show, comes from Christian Louboutin. For the burlesque segment, Lopez goes full-on Vegas — stripping off layers of clothing, including a corset, until she’s in nothing but a shimmering blue body suit. Here, her routine of “Girls,” set on a chaise lounge, gives the sparkling Louboutin peep-toe pumps a front-and-center display.

Other parts of the performance include a tribute to her Latin roots, with songs like “Quimbara,” “Quien será” and “Let’s Get Loud.” She salsa dances in custom lace-up shoes while wearing a Nicolas Jebran nude bodysuit featuring vines and roses.

Opening night was a sold-out and star-studded affair — guests included Justin Bieber, Leah Remini, Nicole Scherzinger and Gina Rodriguez. For her closing number, “On the Floor,” Lopez brought Pitbull out on stage to join the performance.

Said Lopez on the eve of the show’s kickoff, “I’ve been preparing for this moment my entire life.”