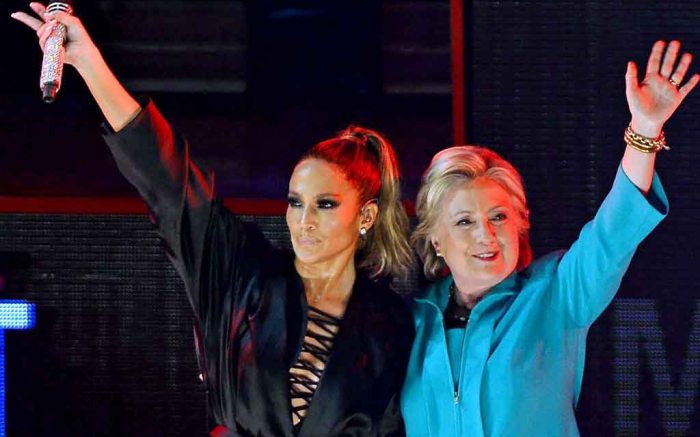 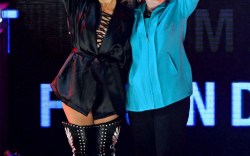 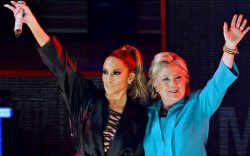 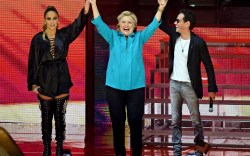 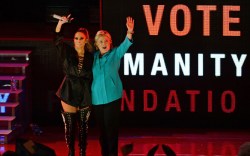 Jennifer Lopez has joined the roster of A-list stars who are “with Her.”

The singer-actress brought out Democratic presidential nominee Hillary Clinton onstage on Saturday at Bayfront Park Amphitheater in Miami and urged fans to vote early for the politician ahead of Election Day.

Lopez entertained the crowd wearing a black leotard and an intricately embellished pair of thigh-high boots. The striking footwear featured a stunning, bedazzled pattern on the side that ran the length of the ankle to the upper thigh. Silver and gold studs were incorporated around the middle and top areas of the boots.

“We are at a crossroads where we have to get it right for the future,” she told fans. “We have the perfect person to take us there.”

Clinton thanked Lopez for her support and urged the crowd to do its civic duty.

“We just heard Jennifer perform ‘Let’s Get Loud.’ Well, I say: ‘Let’s Get Loud’ at the voting booth. You can vote early. Don’t wait another day to vote,” she said. Clinton had on a teal jacket, black trousers and black kitten heels.

In a statement, Lopez cited the significance of the Latino vote in the swing state of Florida.

“Florida, home to one of my favorite cities, Miami, and millions of Latinos is a pivotal state in this election,” she said. “It’s time to unify, support, and vote for the only choice that makes sense not only for Women or for Latinos, but for all Americans. Vote for Hillary. I’m with her.”

Click through the gallery below to see photos from the concert.