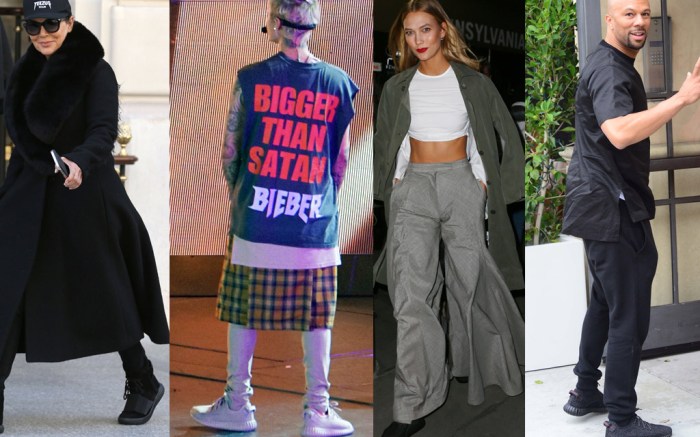 This year has brought only one Yeezy release so far, but there have been plenty of celebrities spotted wearing Yeezys.

The Yeezy Season 3 show and album premiere at New York’s Madison Square Garden on Feb. 11 brought out lots of famous faces, all of whom were wearing Yeezys. We spotted Jennifer Hudson, Karlie Kloss and Pete Wentz wearing Yeezy Boost 350s.

West jetted to New York on Saturday for a close friend’s birthday. When he arrived at New York’s John F. Kennedy International Airport, he was wearing a pair of Yeezy Boost 350s from the Yeezy Season 3 collection that featured an orange stripe on the side. There has been no word on when or if this style will be released.

Justin Bieber, who recently kicked off his “Purpose” tour, has performed in both Moonrock and black Yeezy Boost 350s.

Other celebrities who have worn Yeezys recently include Jay Z, Big Sean, Common and more.

Click through the gallery to see more celebrities in their Yeezy sneakers.