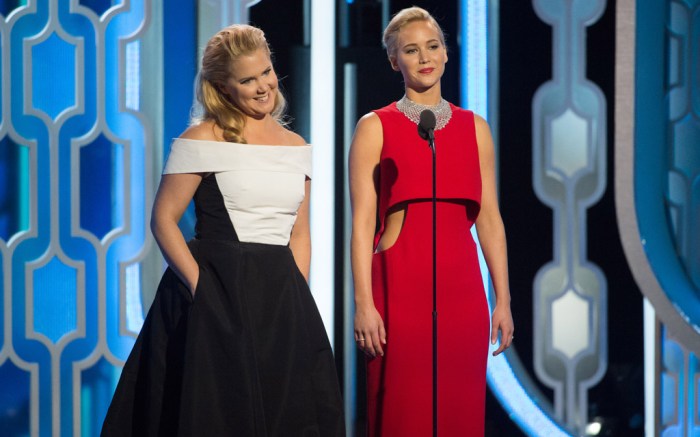 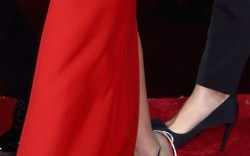 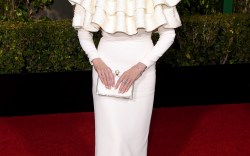 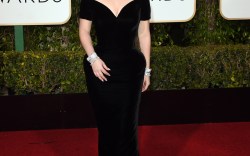 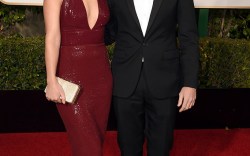 There were plenty of standout celebrity pairings of the night. Maybe the mostbuzzed about was Amy Schumer and Jennifer Lawrence, who lit up social media when they took the stage. Calls were out early on for the two to be the next Amy Poehler and Tina Fey of the Golden Globes.

Schumer had a strong red carpet moment in head-to-toe Prabal Gurung, while Lawrence kept it simple in a red Dior dress and matching shoes.

Other top-notch red carpet pairings included Julianne Moore, who dazzled in a navy one-shoulder dress and platforms. She attended the show with fashion designer Tom Ford, who looked quite dapper himself.

Rosie Huntington-Whiteley’s most-talked-about accessory might not have been her Jimmy Choo Minnie sandals, but her diamond engagement ring. Whiteley and new fiancé Jason Statham hit the red carpet at the Golden Globes together, sparking quite the buzz. Whiteley was dressed in an Atelier Versace gown.

Another favorite on the red carpet was Jason Sudeikis, who embraced the sneaker look with a pair of Jordans, and Olivia Wilde, in a Michael Kors dress and custom-dyed Aldo heels. Looks like these two were going for most approachable footwear of the night, and it worked well for them.

Last but not least, Jaimie Alexander wowed in Jimmy Choo Mariah sandals under her Genny emerald dress. Her date, Peter Facinelli, also wowed in his dapper tux and dress shoes.

Who was your best-dressed celebrity pairing on the night?