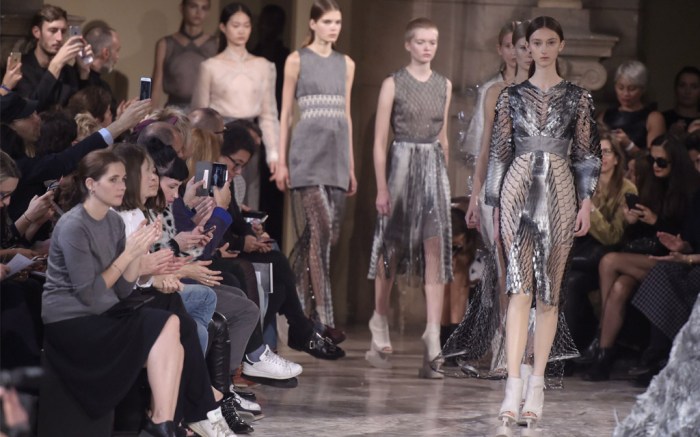 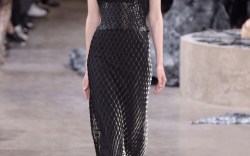 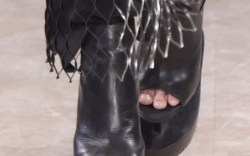 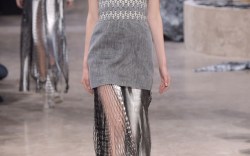 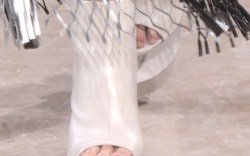 Click through the galleries below to see the best in footwear from the Paris Fashion Week spring ’16 collections.

With the usual flair for the dramatic, Iris Van Herpen sent her models down the runway in elevated cut-out booties. The shoes were suspended above the platform sole on a piece of plastic making the style look like they were floating down the runway.

Hermès went back to chic basics for spring ’16. Easy dresses, pants and tops were done in cream, burnt orange, mustard yellow, black, beige, cobalt blue and a rich caramel. As far as footwear, the runway shoes consisted of pointed toe mules with a low heel and sneakers which all came in a similar range of hues. The styles didn’t possess the same ornamentation as those that Pierre Hardy showed for the house over the weekend at a presentation. —R.A.

At Giambattista Valli, the gladiator was given a graphic Roman update. Replacing intricate lacing was clen ladder strapping. And instead of a pancake sole, his had a comfort footbed covered in glitter. Evening-wear appropriate? Not really outside of the Almalfi Coast or clubs of Mykonos. But for a runway, the sensible sole and reworking of one of footwear’s classics made good sense. Just make sure straps are adjusted properly – they were wonky on many a model. —M.L.H.

At Sacaï, Chitose Abe addressed cowboy dressing with serious aplomb. Bandana prints and colonial embellishment had varying degrees of subtly, while western boots were less overt. Sure they had the characteristic dipped vamp shaft and snipped toe, but twisted block heel, toe capping and cutouts added soigné subversion. As did well-styled large fishnet sockets. There was a lot to see below the ankles. Quite like the mixed-media, gender and genre ready-to-wear, this clever mashup was indeed winning. —M.L.H.

Stella McCartney’s wildly popular lace-up platform shoes have been spotted on celebrities for several seasons now. For spring ’16, the designer paired her plaid, gingham and pleated flowy, layered dresses with a new iteration of her platforms—sandals. The flatform styles were offered in simple strappy styles in neutral colors with thick white soles.—R.A.

At Alexander McQueen, Sarah Burton referenced the iconic shoe shapes of her late mentor. The aardvark rounded boots of his final collection were brilliantly reinterpreted, this time as a kicky slingback clog. They came in multiple iterations – from denim to eggshell leather. And while clog codes have been apparent throughout the spring ’16 collection, what was thoughtful and new here was the embellishment details on wooden soles. So often left rugged and slightly raw, Burton’s came tricked out with patchwork, engravings and even metal hardware inlays. Just call them anti-normcore, fantasy clogs fit for a wood-nymph wonderland. —M.L.H.

Once again designers Carol Lim and Humberto Leon play with shape and color on the Kenzo runway. Cutout over-the-knee boots in patent white and black made a big statement, as did sporty sandals done up in a variety of colors. – M.S.

As far as the footwear goes, designer Phoebe Philo was not feeling her usual minimalist aesthetic this season. Chunky flatform wedges were done on pointy ankle boots, which had metal studding along the sole. The same wedge was also done on a squared-toe loafer, which had leather tied like a turban overtop the vamp. Other standouts in the collection include pointy Mary Jane flats with cutouts, as well as leather Chelsea boots and pointy woven loafers with a wooden heel.

At Vivienne Westwood, there was everything from gold platform sandals to printed oxfords for men and women to cheetah print flats.

At Elie Saab, a less perfected, more spur-of-the-moment attitude prevailed. And nowhere was it more prevalent than footwear. Wafty layers of lace were paired with kicky clashing block heels and flat gladiators for a offhand approach to dressing up. —M.L.H.

At Acne, checkered and striped flat mules gave way to patent red and blue thigh-high boots and an array of thong sandals with velvet ankle covers that almost seemed practical for fending off spring chill. —R.A.

At Mugler, designer David Koma’s body-con looks were brought down to earth with almond toe oxfords. For gowns needing a little lift, it was ergo fishnet overlay booties and thick-strap sandals. Overall, it felt a little heavy handed for the itty bitty looks. —M.L.H.

Designer Jonathan Anderson continued his new, quirky revival of the Spanish luxury brand. Leather ankle boots had side cut-outs and patent toe caps, which were squared-off in shape. Other boots were done in a metallic holographic treatment, or in black leather with circular shapes of metal as embellishment. PVC ankle-strap sandals had lucite heels for a barely-there effect. —C.A.

Barbara Bui focused on a high heel sandal last this season, compete with a towering stacked wood cylindrical heel. Uppers were either a thick thong panel or crisscross strapping. They were one of the strong points of the long and languid collection. —M.L.H.

Designer Julien Dossena paired experimental pieces – be they house code chain mail dresses with attached knitwear or frayed tailoring – with a flat cropped boot. The winklepicker shape matched the sharp frisson of the collection. Less so the western boots. Other looks were shown with a very open-laced stiletto or thong sandal. —M.L.H.

At Carven, designers Alexis Martial and Adrien Caillaudaud followed up their debut collection at the brand by staying carefully on-message.

Footwear was very similar to last season, a lug sole boot, this time adapted as an open toe. The thick heel came in various acrylic marble treatments. But let’s hope next season there is something truly new.—M.L.H.

Anthony Vaccarello loves to play with asymmetry in his ready-to-wear, so it made good sense that he mimicked his slashed-to-there aesthetic in runway sandals. Full-exposure heels came in his preferred black on black, but also in flashes of mixed metallics and acrylic paneling. They were again in collaboration with Stella Luna. These revealing styles offered the full reveal of feet and begged the question: where does one get a worthy pedicure in Paris? —M.L.H.