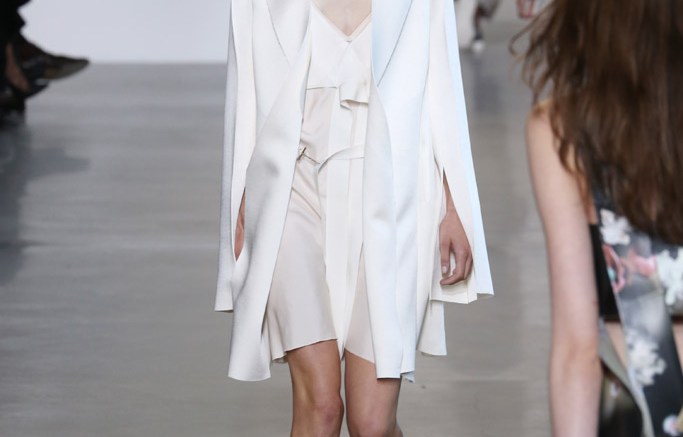 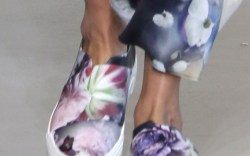 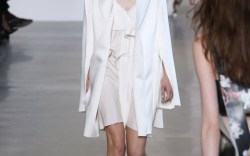 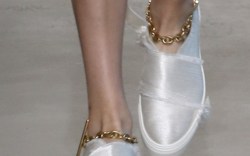 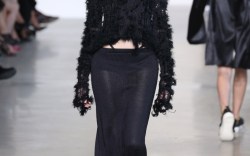 Calvin Klein made a return—once again—to its minimal, sportswear roots, showing a collection of low top slip-on sneakers. Floral prints made an appearance on the shoes, which mimicked the same prints seen in the clothes.

Certain styles were also elevated with unexpected touches, done in white and black satins with frayed edges (our personal favorite). The combination was sort of girlie, and sort of grunge—just like Calvin’s customer today. — C.A

Especially done in a coral suede colorway, the shoes were an appealing combination of the old with the new—much like the collection itself. — C.A

Designers Kate and Laura Mulleavy have never been known to ground their collections in realism, and their spring ’16 show at New York Fashion Week was no different. The footwear this season was especially otherworldly, styled with hosiery done in collaboration with Commando.

Ankle-strap pumps were done in black suede, striped with metallic leathers that were embossed with a snakeskin print. All the heels had a slight curve to them as well, providing a fantasy element that echoed the frilly, fringed and sequined clothes. Beautiful, and a little bit weird—what Rodarte does best. — C.A

Thom Browne’s class was in session this New York Fashion Week. The designer offered a classroom setting for his latest spring collection, which was filled with prep school attire (from pleated uniform skirts to boxy blazers).

The show was also set to the musical score from ‘Kill Bill,’ which proved a fitting tie-in to Browne’s Geisha-inspired footwear. Lace-up and Chelsea boots were given Geta-style soles, with two black blocks offering extra platform height.

Given the Japanese customer is a huge supporter and market for the brand, the ode to its traditional culture seemed appropriate here. Plus, they weren’t just your run-of-the-mill boots. A major plus. — C.A

Prabal Gurung’s spring ’16 collection was described as an “ode to Nepal.” The designer, who is from Nepal and began the Nepal Earthquake Relief Fund, kicked off the show with a group of chanting Monks, and viewed the collection as embodying the spirit of Nepalese  community.

The result was lively footwear done in vibrant, saturated hues. The style that caught our eye? Gurung’s pointy toe heels with front cut out details, done in an unexpected tangerine colorway.

The shoe mimicked the colors found in the wears of traditional Buddhist monks — a thoughtful, and eye-catching, tie to the designer’s original inspiration. — C.A

For spring ’16, Joseph Altuzarra looked to his father’s Basque heritage for inspiration.

While show notes cited handicrafts and ceramics as reference points, nowhere was that Spanish influence more deeply felt than footwear. After all, nothing could be more representative of the region than espadrilles, sartorially speaking.

But Altuzarra’s were not the nondescript, pancake flat variety meant to be worn one summer, shredded during beach-combing, then discarded. Instead, the designer fused the classic’s signature features — canvas or leather upper, jute sole, ankle wrapping — onto a sophisticated high pump last. — M.L.H

Womenswear designer Tanya Taylor and footwear talent Paul Andrew continue to bring out the best in each other. Following up their ongoing seasonal collaborations, today the duo showed a series of lucite block heels, strewn with flora details.

Bits of botany were even suspended within the chunky acrylic heels, a technique Andrew developed especially for the buzzy designer.

“Working with Tanya is always so much fun for me,” said Andrew. “We share the same color sense and appreciation for refined elegant shoes with an edge. I really love how my floral sandals styles were interpreted for her spring ’16 presentation.”

Leather bloom embellishment tricked out the strapping of shoes, which were offered in three different versions – a low block heel, mule style with scalloped clear embroidered upper and a ladder-strap sandal.

While working with plastics can often take footwear in a dollhouse direction, this was certainly not that. Instead, it skewed whimsical, wholly original and just the right amount of weird to subvert Taylor’s sweet-with-a-twist prints and textural techniques. — M.L.H.

Aside from the fact that Kanye West showed up to lend his support for designer Aurora James, this NYFW presentation was a must-see on FN’s list. James, a Vogue Fashion Fund finalist, founder and designer of shoe line Brother Vellies, showed an impressive collection on day one, staying true to the vision on which she founded her brand.

“I’m always inspired by different things in Africa,” said James. “One of the things that’s important to me is identifying different skill sets that people have [there], and finding ways to harness those into the collection.”

“We hand-carved bone into beading, using them on sandals,” said James. “We also did our first heels, as well as Moroccan wooden clogs.” It was her take on a gladiator sandal that particularly caught our eye. The thoughtful craftsmanship and detailing that went into the design was clearly apparent.

Earlier this year, Aurora James was named as one of FN’s emerging designers to watch. —A.Y.