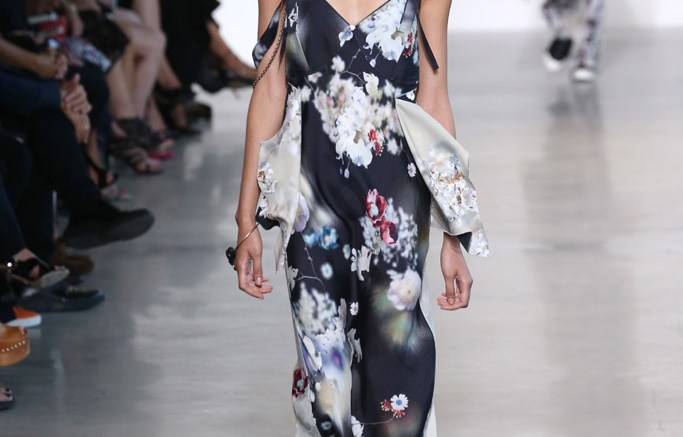 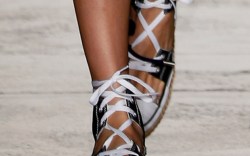 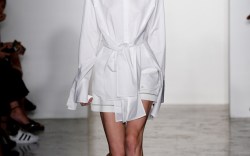 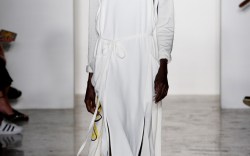 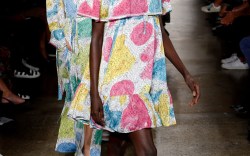 Click through the galleries below to see the best in footwear from the New York Fashion Week spring ’16 collections.

Calvin Klein made a return—once again—to its minimal, sportswear roots, showing a collection of low top slip-on sneakers. But the styles here were elevated with unexpected touches, done in white and black satins with frayed edges.

Chunky platform sandals in both a wrap style and mule style took center stage at Ralph Lauren for spring ’16. The designer also offered sneakers in his signature camel color.

When in doubt, put a strap on it. The Boss spring ’16 show featured multiple takes on the double-strap sandal, done in both flat and tall heel heights. The style was slightly reworked here, with one strap being wider than the other.  The colorways came in more muted tones—whether in black, blush or white.

For spring ’16, Kors offered his version of the continuing mules and platform sandals trends. Kors added a bit of texture to his platforms with python print on the platform piece in blue and gray. There were also easy crossover strap slide sandals and wearable strappy buckled sandals.

The pointy flat soars to new heights… literally. The Delpozo spring show featured ankle-strap flats with flatform soles. The styles were embellished with bits of festive fringe, in feminine metallics and pale pinks. Other experimental shoes include pointy pumps with oversized bows on the side.

Suno’s latest show featured sporty footwear elements, such as elastic bands used on both pumps and flat sandals. The classic Mary Jane silhouette was given a modern spin here in white leathers, with the colored elastic bands taking the place of traditional leather straps. The straps were also seen on slingback sandals, while patent loafers had thick flatform soles. — C.A

Narciso Rodriguez went for bold shapes this season, featuring leather peep-toe ankle booties with front cut-outs. The style was done in solid colors, as well as embossed snakeskin-print leathers. Leather strappy sandals were a simpler offering in the collection. — C.A

Alice and Olivia went ultra-strappy with its take on the gladiator sandal. The style, done in suedes and metallic leather, were offered in both heel and flat heights. Platform sandals were also done in various striped patterns, while espadrilles were finished with a floral appliqué. — C.A

Rag & Bone kept to its athleisure focus this season, offering a mix of sporty sandals and sneakers. Leather crisscross sandals came in white and black leathers, while chunkier wrap-tied gladiators were done in the same colorways. High-top sneakers—which bared an uncanny resemblance to Air Jordans—were styled with punchy red laces.

Designer Phillip Lim celebrated his 10-year anniversary this season. For spring, Lim modernized the idea of formal satin shoes. Mid-calf, open-toe boots were done in a slouchy satin material, which ended up looking a tad unflattering on the leg. The same satin approach was done on thong-style ankle booties, a more forgiving silhouette.

The designer departed for her usual clean, unfussy silhouettes this season. Printed “urban surf” motifs were printed on ready-to-wear, paired with all-white or botanical-printed loafers. Flatform sandals were also offered, with snakeskin or floral prints appearing on the sole or as an all-over treatment.

Amy Smilovic embraced all things 90s this season. From ultra-parred down ready-to-wear to the simple mule sandals in nude colors, the show was almost too minimal for its own good. Still, tiny flourishes — like a slightly curved heel — added a dash of visual interest to the collection.

The brogue: one of most quintessential of footwear classics. At Givenchy this season, it was torn apart, reworked and completely rethought — for her and for him. Both made a strong point, quite literally.

At Betsey Johnson, attendees watched models parade down the runway, dance on the catwalk podium and celebrate all things Johnson whilst wearing leopard print platform ankle boots, multi-colored pumps and metallic silver flats. Right before the designer celebrated her 50th anniversary with a trademark cartwheel and splits.

Jason Wu was feeling the crisscross silhouette for spring. The designer’s spring ’16 runway show featured both heeled and flat crisscross sandals in a variety of colored leathers, from hunter green to snakeskin-printed leather. The styles added clean lines to Wu’s otherwise frilly and sheer ready-to-wear.

Creatures of the Wind

Creatures of the Wind presented its line spring ’16 women’s footwear on the runway, as well as its collaboration sneakers with Athletic Propulsion Labs (A.P.L.). While the label’s own shoes featured heeled sandals with chain ankle straps, the A.P.L collaboration styles included the brand’s signature runners in new colorways—from cherry red to a metallic-and-beige combo.

The brand displayed its spring ’16 women’s footwear collection amongst a sea of hydrangeas. The offering includes pointy t-strap heels and flats, some with floral-printed toe caps, as well as slip-on sneakers, wedge sandals and bowed loafers.