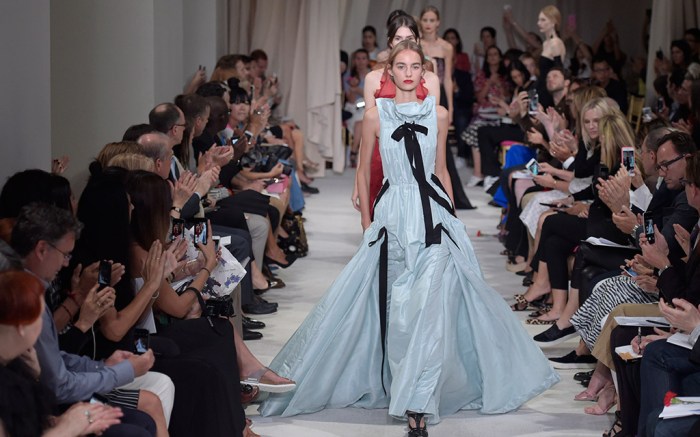 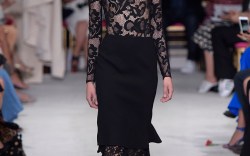 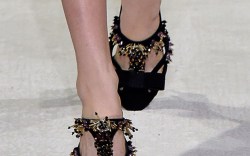 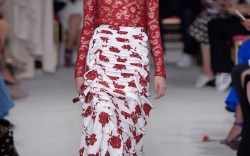 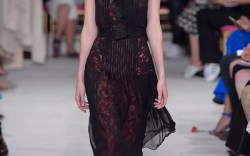 For spring ’16, Oscar de la Renta designer Peter Copping had Spain on the brain. And why not? It’s where the late Mr. de la Renta honed his craft under Cristobal Balenciaga, after all. The pungent palette, rich handicraft tradition and underlying passion of the place was woven into every look, from top to toe.

This naturally extended to espadrilles, those most Spanish of shoes, which house footwear lead Daniel Lawler told FN were made in Spain with a new factory he found. To make them Oscar-worthy (and wearable with everyday and evening looks) they had silk uppers which came embellished with a hearty smattering of stone and sequin embellishment and feminine ankle-wrapping. Like the best of Lawler’s work since he joined the team three seasons ago, they undercut the signature brand exquisiteness with something a little less precious, like that flat jute sole.

Elsewhere, Lawler stepped things up, formally speaking, with widow’s peak satin mules with bugle beads sprouting like porcupine quills and patent-laced basketweave pumps. But these were not just about making a flashy entrance though. Soles were panelled with contrasting jewel-toned suede and piped in gold. They were indeed striking from all 360-degrees.

Judging from his past post at Nina Ricci and his premier collection for de la Renta last season, Copping is a mules man. Lawler responded with a fabulous march of cutout grid styles with fresh chisel-almond toes. Out they came in shades of sherbet, oxblood, peony and ink.

And you can’t have an ode to Espania without a shoe to tango in. Bonded lace Mary Janes stilettos and pumps with a blood red suede rose perched on the toe (better on one’s feet than clenched between teeth, we say) certainly stomped and shouted “Ole.”