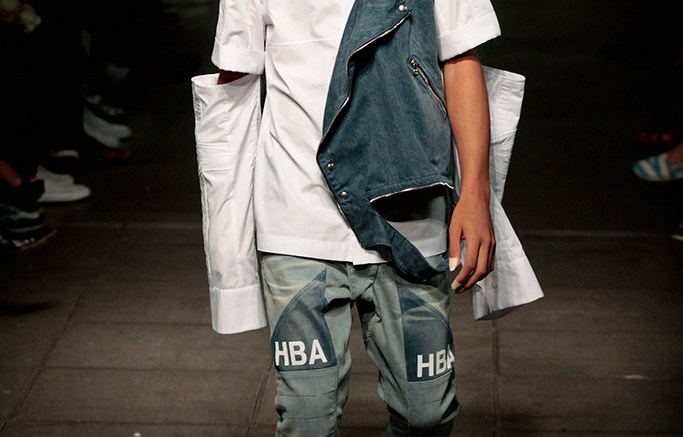 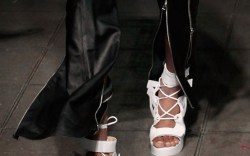 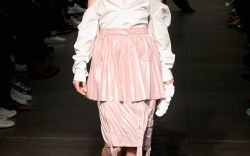 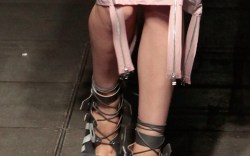 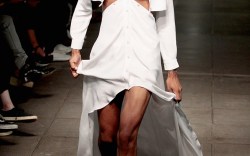 Midtown tourists mixed with men in glam-goth gowns — that was the setting outside of Hood By Air’s spring ’16 show, shown in a venue just across Madison Square Garden on Sunday.

The army of HBA fans made for somewhat of a comical sight, seeing severe brand devotees — piercings, studded jackets, dramatic turbans et all —mingle alongside tourists in cargo shorts and hot dog stands. But the message hit home hard, which is that designer Shayne Oliver has amassed a cult-like following for his brand in such a short amount of time.

The collection, shown on models of both sexes, maintained its genderless focus. Deconstructed ready-to-wear looks prevailed, such as half of a denim jacket worn over a white collared shirt. Straight jacket-like jumpsuits were contrasted against the brand’s sweeter looks in the show, like a pink pleated skirt with sheer underlay.

As for the shoes, the models wore both sneakers and lace-up heels. All-white or beige sneakers had thick lug soles, with raised tongues. The same colorways were done in the strappy sandal styles, which had the words “AIR” via leather cut-outs on the sides.

Yes, the idea of men in heels is still a disruptive idea. But following an atypically safe season here in New York — dare I say, a snooze fest? — the show infused a sense of excitement that, so far, has been missing.

And the excitement isn’t without warrant — the brand’s crazier past-season shows, like a glitter-covered Timberland-inspired boot, were eventually carried in retailers such as Barneys New York. He must be doing something right.

Click through the gallery below for all the runway images and shoe highlights from Hood By Air’s spring ’16 NYFW show.