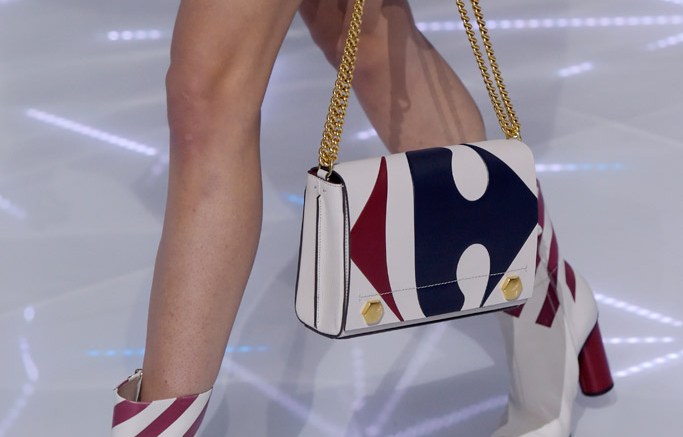 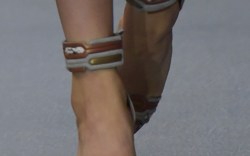 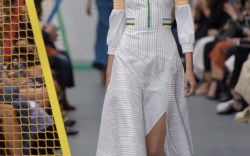 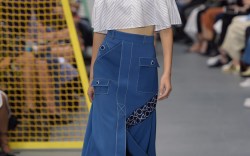 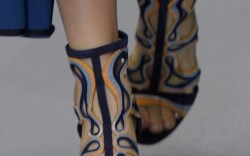 Click through the galleries below to see the best in footwear from the London Fashion Week spring ’16 collections.

Anya Hindmarch’s spring presentation was filled with optical illusion footwear. Below-the-knee and ankle boots had geometric prints printed onto the leather, from diamonds to diagonal stripes. Sneakers and slip-ons also had the prints in a subtler version, as panelling on the side or top of the shoe. — C.A

It was all about shapes at Peter Pilotto this season. Following past collaborations with Nicholas Kirkwood, designers Pilotto and Christopher de Vos worked on their own footwear this season. Ankle boots featured squiggle cut-outs, which matched the various ruffling seen on the apparel. Slides and heeled sandals had various stripes of colored leather combined for a futuristic, industrial look—something Star Wars’ R2-D2 would wear if she were a fashion-savvy droid. — C.A

Thomas Tait called on Manolo Blahnik for his show shoes this season. It was an inspired pairing that paid off. Tait’s avant garde tailoring and curious references were balanced with Blahnik’s classic stiletto sandals. Some came customized with bits of fabric from the ready-to-wear as ad-hoc straps. — M.L.H

The Mary Jane was transformed into a boot style at Roksanda Ilincic. In collaboration with Tabitha Simmons, the duo kept the shoe’s most signature qualities in tact: a round toe, sturdy sensible heel and gamine attitude. That was only further enhanced in pastel hues. Though the best versions cut the sweet silhouette in a bitter black patent. — M.L.H

Topshop Unique went prim for spring ’16 in the footwear department, at least. Sandal stilettos came trimmed in marabou, while slingback pumps in either black or white had matching or classing bows placed on the outside of the uppers, just so.

To skew these shoes a little less sweet, they were styled with a mishmash of cool layering tricks — think knits on dresses on turtlenecks. It was a good reminder that with some heels, it’s all in how you work it.  — M.L.H

Get ready for liftoff: MM6 Maison Margiela’s spring ’16 shoes includes flatform slide sandals, with extra-thick ropes tied around the ankles. The style was done in white soles with beige leather uppers, as well as black soles with brown uppers. — C.A

These days Mary Katrantzou is the only ready-to-wear designer Gianvito Rossi has time (or deems worthy) of collaborating with on runway footwear. With her latest cosmology-themed collection, it’s not hard to see why.

Unchartered territories were indeed explored in the form of brilliant metallic python booties and pumps with lucite slab heels — already a big spring ’16 trend. Sometimes they were crystal clear, other times tinted solarized hues. The effect was otherworldly and allowed airy dresses to almost float on by. — M.L.H

JW Anderson took the brogue to new heights for spring ’16. Continuing his efforts to subvert staid British classics — be, say, Wallabees or nautical knits — he sent out a square toe stiletto version, updated metallic polished leathers. Straight on, they looked quite trad, but viewed from the side, the new shape (complete with high back tongue detailing) was anything but ordinary. Anderson also sent out his take on the ankle boot, featuring a similar square toe. — M.L.H

Not your average rain boots: Hunter elevated its signature Wellies this season. The rain boot was done in both traditional and fashion-inspired takes. Suede (and we’re assuming waterproof) lace-up boots had white lug soles, while the signature wellington was done in a pastel ombre colorways. Rubber perforated clogs were also paired with matching socks. Men’s below-the-knee boots were done in a sort of splash pant material, buckled in with red straps.

When in doubt, put a feather on it. Henry Holland’s latest spring ’16 collection at London Fashion Week featured a bevy of footwear adorned with various feathers and plumage, used as a sort of fringe treatment on heeled mules and below-the-knee boots.

The bird-like look had feathers arranged as a band overtop the vamp of the shoes. Some were done in all-black, others had the feathers colored in a sort of ombré treatment, graduating from white to pink tips.

The Versus spring show featured an unexpectedly subtle footwear offering this season, with minimal women’s strappy sandals making up most of the collection. Versace’s signature gold emblem was used as embellishment via t-straps. Men’s high-top sneakers had speed-lacing details for a pseudo-hiker vibe. — C.A

Could mismatched shoes be the latest look? That’s what Eudon Choi did for its spring ’16 show. The designer showed strappy sandals, white leather lace-up boots and black leather Chelsea boots. Some looks had the two different boot styles paired together, as though the franticness backstage hadn’t left enough time to find correct matchings. The two-toned shoe styling actually worked here, as it added a bit of off-kilter dimension to the collection’s overall subtleness. — C.A